Tee Teddie (Won't You Be My Teddy Bear?)

At 4x3 feet, Tee Teddie is anything but tee.  The painting, begun in 1995 and completed in 2013, first hung in Café Tee George, artist George Rodrigue’s original Lafayette restaurant, which was replaced by the Blue Dog Café after burning in 1997.  Tee Teddie was the only painting to escape the flames, while interpretations of Elvis, the Blue Dog, and Cajun traditions remain lost forever. 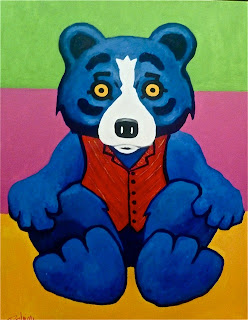 “I painted Tee Teddie to accompany Elvis and his Hound Dog on opposite walls of the restaurant’s bandstand,” recalls George.  “Café Tee George’s theme was early memorabilia, including cowboy comic book covers, old time metal signs, and personal items, such as my barber chair and 25-year crawfish collection.  All was lost or severely  damaged except Tee Teddie, which sustained only smoke damage, darkening its colors.” 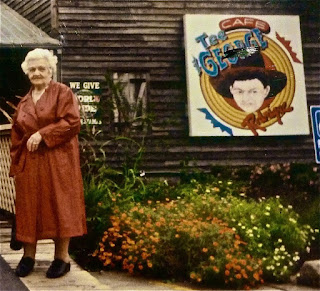 As a child, Rodrigue was known as “Baby George” or “Tee George” because his father was George, Sr.  By high school, however, his friends called him “Big Rod,” and he lost the ‘tee’ reference until his restaurant opened in 1995, some thirty years later.  Tee Teddie combines these ideas, a huge painted bear and an endearing childhood reference to small. 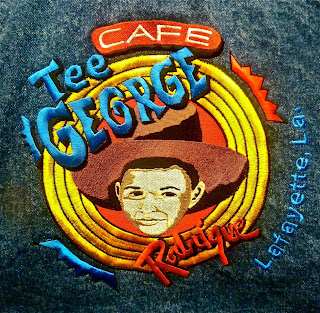 The painting also recalls a series of works based on George’s notion of the Blue Dog wearing a bear suit, resulting in numerous images throughout the mid-1990s (some pictured here).

Following the fire, George stored the painting first in his Lafayette warehouse and then in our Carmel, California home, where it hung on the wall for more than a decade.  Although undamaged by fire, Tee Teddie seemed unfinished to George for years, more a symbol of a lost idea, something that escaped the flames but not his psyche.

“I thought of the painting for some reason recently and decided after all this time to restore it like it was.  Once I started, I realized how good it is, and I kept working, repainting it completely in my colors and style of today.” –George Rodrigue 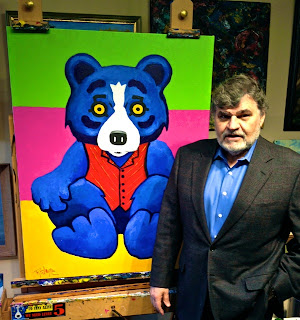 It’s interesting that after eighteen years George revisited this painting, as it's rare for him to revisit any work.  This is especially ironic since it hung in his Carmel studio, where he has not painted in nearly two years.  Nevertheless, he dreamed of finishing it and, to my surprise, shipped the painting to Louisiana just after Christmas, even as we relocate to California for a year or more later this month.

George spent much of the past two weeks restoring Tee Teddie, altering its earlier colors and removing wording that referenced the old restaurant.  He also chose a weighty, ornate frame for the giant, little bear, which hangs this week on public view for the first time in sixteen years, and for the first time ever in New Orleans.

(Update, 5/16/13; George Rodrigue completed a silkscreen print based on this painting.  Won't You Be My Teddy Bear? is a signed and numbered edition of 250; 40x30 inches; click photo to enlarge-) 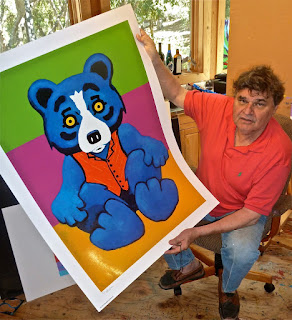 *note, George asked that I destroy all previous photos of the painting, so that it begins anew as you see it here; thus I did not include any ‘before’ pictures-

-for information on this and other ‘dog in a bear suit’ paintings and silkscreens, contact Rodrigue Studio-