Blue Dog: A Life of Its Own

"Feel the dignity of a child. Do not feel superior to him, for you are not." - Robert Henri

It was in Hollywood, ironically, that George Rodrigue and I reflected recently on the Blue Dog in a new way.  We learned of a school in southern California that used the styles of art world masters to paint Blue Dogs.  Like most school districts in America today, the school operates without any funding for the arts.   Thanks to an active P.T.A. and a dynamic, dedicated art teacher, however, these students study great artists from Modigliani to Nevelson and, to our astonishment, use George Rodrigue’s Blue Dog to do it. 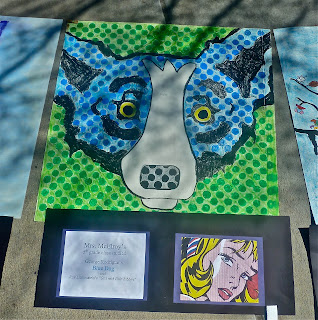 We receive annually thousands of class projects, piled high for years in our dining room and now uploaded on-line in our student art gallery for all to enjoy.  These come from Japan, New Zealand, Germany, and every state in the U.S.  Yet George winces when I compare him to Picasso, the school-wide artist in my day, the 1970s.  We studied Picasso because he was accessible, like George, appealing to students of all ages.  Still working in his studio, Picasso wasn’t yet mythic like Michelangelo or Monet, and the idea of his existence made the art world real.

What I would have given, I told students in Valencia, California last week, to see Picasso at work.  And yet George Rodrigue paints here for you and shares his story.

Admittedly, we visited southern California on an unrelated mission.  It was our foundation that suggested, since we would be in the area, that we investigate this school-wide arts program, nearly 900 students painting Blue Dogs in the styles of other great artists.  They devoted their year to this project, and their preparation and welcome was unprecedented.  They knew everything about George Rodrigue, his Landscapes, Cajuns, and Blue Dog, so that their anticipation fed ours, intensifying as we arrived, greeted by students, teachers, community leaders, journalists and large-scale class projects constructed on linoleum squares. 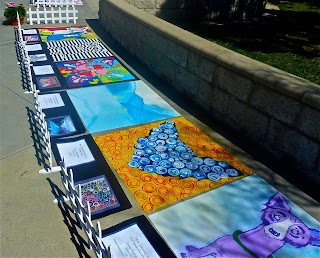 The Blue Dog has always had a life of its own.  Museums from Memphis to Frankfurt continue to elevate the work beyond kitsch with exhibitions since the 1990s.  Yet it was this school visit, our first in California, that impacted George Rodrigue more than any museum.

“I never once considered myself in league with artists like Miro and Mondrian, yet this school saw my art in these terms and spent a year connecting the Blue Dog to other artists and tying it to a higher level.

“After all this time, this idea and connection was a complete shock to me.  It took a grammar school teacher and students to show me a new perspective.  I think for the first time, I saw where this has gone and how, over the past thirty years, it’s affected the art world and others.”

We shared with the children during two lectures and demonstrations, yet it was their questions and enthusiasm that made this school visit, more than others, such a success.

“It was obvious,” says George, “that they studied both me and my art in context with these other artists and actually grasped what was going on.” 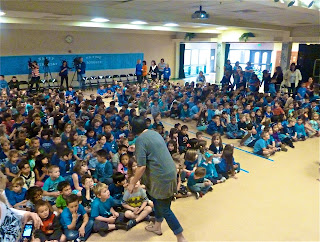 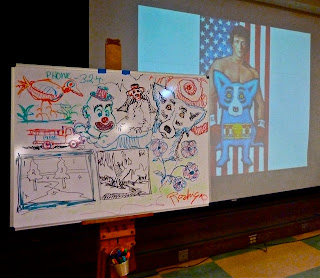 As we shared the images, the young kids laughed with innocence.  But during the later session, the older students asked serious questions about line, shape, color and content.  Our speeches are unscripted, and we begin by feeling the energy in the room and the mood of the audience.  One child who watched both presentations told his mother,

“But this lecture is different than the other one!”

With only a loose plan, we share the art according to the level of interest.  This varies not only among ages, but also among regions.  In this southern California school, for example, I focused on George’s years at the Art Center College of Design, just thirty miles from North Park Elementary.  I talked about his portrait of President Ronald Reagan, which hung for years in the Reagan Library in nearby Simi Valley.  And, I shared the unique role that Californians played in the Blue Dog Series.

It was during a Rodrigue exhibition in Beverly Hills in 1988 that George first heard the term ‘Blue Dog.’ 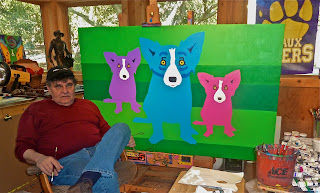 George also shared with the students their good fortune in studying the arts, something unavailable and unappreciated in many schools, even today.  In 1950s New Iberia, art was non-existent in Louisiana schools.

“I didn’t have the opportunity to study and emulate great artists.  I drew things I liked, and the first original painting I saw was my own.   Sixty years later I still paint the way I felt as a child.  I emphasize to students how important it is to retain that innocence, and that it’s okay to create art in this way.

“The only art I saw growing up was what Vincent Price curated for Sears & Roebuck; yet it influenced me and remains with me today.”

The school visits and our work with the George Rodrigue Foundation of the Arts (GRFA) represent both a legacy and new direction for George and the Blue Dog.  One would think that the growing museum attention would spark this momentum, yet the children are the future, and they are far more important.

“Usually we visit schools to teach,” says George.  “This time, however, the school taught us.  It’s the kids who bridge the art.  To be studied by a child is the best way to connect with the future and is more important than hanging on the walls with great masters.  This experience gave both me and Wendy a completely different view and impact, and maybe even a new beginning.”

-George Rodrigue and I hope you will join us in New Orleans this Saturday, March 23rd,  for the 2013 GRFA Art Scholarship Award Luncheon; ticket info here-