The American Indian in Louisiana

As George Rodrigue and I explored ancient Indian mounds in northeast Louisiana, the sun in my eyes and warm, wind-blown hair in my face, I accidentally turned to an old page in my notebook covered with scribbles from an earlier adventure.  Unaware of my mistake, I wrote,

Each ridge 4-6 ft high when built, 50 ft across top, 100 ft in between. Imagine without trees but with huts. 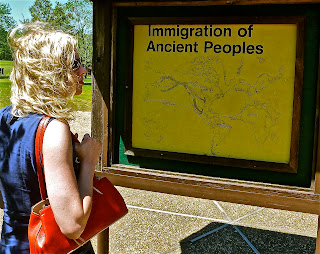 I didn’t notice until later that alongside my notes above appear the words, “abstractions of American Modernism,” referring to artist Georgia O’Keeffe, and yet somehow fitting regarding these patterned, evenly spaced ridges and oddly shaped, unexplainable man-made hills, the largest spanning seven hundred feet across and seventy-two feet in the air. 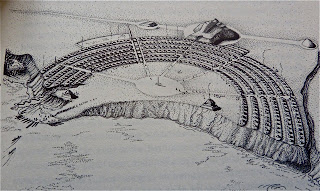 Our guide explained the phenomenon in detail, predicating her information with phrases like, “We think…,” “Archeologists surmise…,” and “We don’t know for sure, but…”

“Poverty Point archaeology,” writes anthropologist Jon L. Gibson, “consists of a few facts, lots of interpretations, and much that is not known.”

Indeed the site, named for a nineteenth century nearby farm and spreading one hundred miles on Bayou Marcon in the Mississippi River delta, surprises in a state so flat that in the 1930s the New Orleans Audubon Zoo constructed a large mound of dirt to “show the children of New Orleans what a hill looks like.” (from the zoo’s website, describing ‘Monkey Hill.’)

Throughout our tour, George Rodrigue recalled his lifelong fascination with the American Indian. In 1960 he won 1st place in the category of Social Science at the Catholic High Science Fair in New Iberia.  He also won 1st place at the district science rally in Lafayette and 3rd place at the state rally in Alexandria. 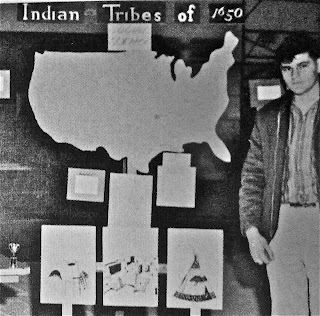 Rodrigue’s project, “Indian Tribes of 1650,” focused on the American Indian culture before the influence of the white man.  The large U.S. map shows the location of tribes before any imposed migration caused by European settlers.  He illustrated similarities and differences in housing, clothing, and food-gathering between Native Americans within varying parts of the country.

“My skill in drawing and painting had a lot to do with the success of my project,” recalls George.  “I expanded the display at each level.  By the time I reached State, it was four times larger than when I started.

“I was the only student from New Iberia in 1960 to win an award at state level.  Along with my popular monster paintings and my achievement of Eagle Scout, it’s one of the best moments of my high school years.” 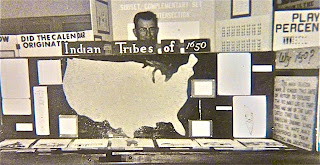 “Twenty-five years later I revisited the Native American culture on my canvas when I traveled regularly to New Mexico.  By the mid-1980s the Cajun food craze reached Santa Fe, and I met Rosalea Murphy of the Pink Adobe Restaurant, who was originally from New Orleans.  She gave me a show, and I filled it with paintings of the American Indian but in the same style as my paintings of Cajun folk life.” 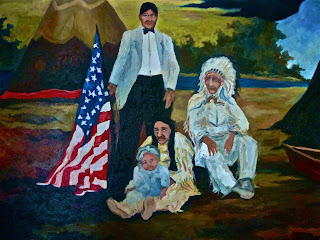 It’s easy, I thought to myself as George reminisced, to understand why the Native Americans chose Poverty Point as their home for seven hundred years. Although the modern world, such as it is in rural, mid-state Louisiana, drove out or killed the once-abundant animals, this is indeed God’s country, with wildflowers, lush grass, flowing water, shade, sun and breeze.

“These Indians had it made,” commented George, recalling our Grand Canyon camping trip. “Think of the Anasazi living within caves hundreds of feet above the ground and trapped each winter by the snow.”


Use your imagination, urged our Poverty Point guide. So we pictured pyramid-like structures made of earth rather than stone, the stage for ceremonies, and a focal point for people living in semi-circles around the base of the largest mass.  Our imagination expanded, as we learned that the oldest mound in this area of Louisiana dates to 3900 B.C., some 1500 years before the Egyptians built the pyramids at Giza!

According to archaeologists, 23,000 people lived at Poverty Point in 1300 B.C. during the height of its culture, the same period King Tutankhamun ruled Egypt. They hunted animals, wove baskets, and hauled dirt, some mounds requiring the equivalent of 16,000 dump truck loads, or 10-12 million baskets-full.  The unnamed American Indian tribe lived atop the concentric ridges, affording drainage and order for their thatched huts. Bayou Marcon was a lake at this time, and the Mississippi River flowed only three miles away. 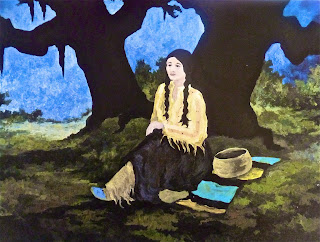 Rich with artifacts, the site boasts arrowheads, pottery shards, tools, jewelry, and evidence of baskets, as well as rocks carved with figures and animal designs, usually birds and foxes. Anthropologists believe the Indians traded baskets for stone with their contemporaries in the West.  Unlike the tombs within the Egyptian pyramids, the mounds at Poverty Point reveal no ancient human remains, indicating instead cremation. The larger mounds were probably built for ceremonial use.

Experts claim that this organized and rooted society was highly unusual for the hunter-gatherers (a term I had not heard since grade school). They built their mounds with determination and skill, packing the dirt in layers so that today, 3500 years of erosion later, we’re left with an anomaly: Louisiana’s Hill Country. 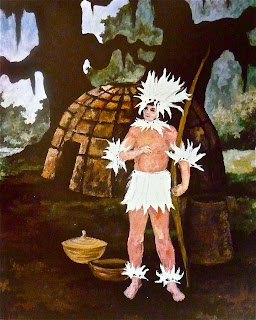 Eventually these original Americans adopted us, fighting for a 'new' country, the place they already called home and revered as sacred for thousands of years. They created a legacy not only worth studying, but also worth visiting. On our road trip to northeast Louisiana, the area between Rayville and Tallulah, we gained a new appreciation for America’s history and Louisiana’s important role in preserving the story of our ancient world.

-for a related post see “America the Beautiful:  Crossing New Mexico and Arizona,” our journey through the Navajo Nation and the Hopi Indian Reservation-

Posted by Wendy Rodrigue Magnus at 8:50 AM