As a result of last summer’s sidetrack, George Rodrigue and I missed our annual time in Carmel, California, returning just this week for a year, maybe two, as we seek something still ill-defined.  We have yet to analyze his near-death experience or rather, our second chance, referring often to the excuse, “it’s still too new,” as our reason for avoiding the harsh reality of cancer events while embracing the happy ease of school visits and student art contests.

George searches for answers in his art, yet in New Orleans, where he’s painted feverishly forty canvases since last fall, he reassesses his life before reassessing his art, because he can’t help it in that city of over-stimulus, because to reach the heart of the matter, again, “it’s still too new,” and we have to get out of the city and know quiet for a while. 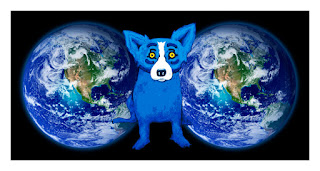 (pictured, The Best of Both Worlds, 2013 by George Rodrigue, 32x60, archival ink printed on metal; click photo to enlarge)

In a lesson perhaps understood by all of us on some level, it’s almost impossible to appreciate fully a situation while one lives it.  During bliss, we rarely pause long enough to smell deeply, so that we remember the roses.  And enduring hardship, we change maybe for better and maybe for worse, but we don’t recognize change as it happens, so that only through reflection years later do we acknowledge ‘before’ and ‘after.’

The same is true in art.  George Rodrigue describes his years at the Art Center College of Design in Los Angeles as both frustrating and liberating.  He learned from professional artists he admired and emulated, yet he noted these champions of the abstracts’ rejection of anything new, specifically, during those mid-1960s Pop Art years, a strong denial of the commercial and literal in art, an ironic rebuff given Art Center’s focus on advertising design. 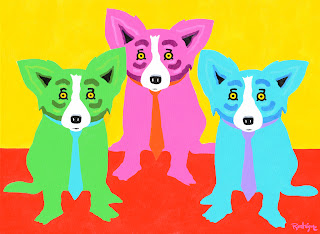 (pictured, The Dukes of Dixieland, 2013 by George Rodrigue, 30x40, acrylic on canvas; click photo to enlarge-)

Today, in writing these essays, I face the same challenges.  I reflect on George’s battle with cancer, still too new to discuss in detail, and yet a giant, abstract lesson looming, waiting to change our lives, to change his art.  In fact, unable to face the big picture, I managed to write for months about his disease without mentioning the word itself (see the posts from June through September of 2012 in the "Blog Archive" to the right of this essay).

I watch him paint, and I recognize something as different, yet I’m too in the middle of it to articulate the changes, and he’s too in the middle of it to broach the emotions with anything but a subtle reference in his art or discussion.  This is true of not just his illness, but rather of all life experiences.  It is only today, for example, that we can look back on an artistic project like the Xerox Campaign or a disaster like Hurricane Katrina and study them as turning points in George’s art as much as in life. 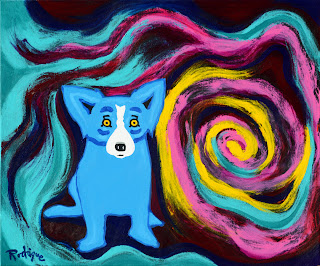 "I realize more today than ever," says George, "that Europe had to experience the Dark Ages in order to have the Renaissance.  Art reinvents itself by people who go through things that they may not understand at the time.  There's always hope that new generations will discover new things that eventually propel society forward.

"For lack of a better word, I feel now a renaissance in the way I look at things and in the way the Blue Dog looks at me."

Sometimes it all becomes clearer when we allow others to observe and conclude for us.  Author Patty Friedmann wrote the foreword to my book (due this fall, UL Press), and her words struck me physically, to where it’s agonizing to realize that someone, until recently a stranger, gets me so well, understands my labyrinthine style, and yet actually likes it.  It’s hard to read her words and not breathe less steady and wonder how she managed from my muddle to get the picture.

Through our foundation, George and I work often with children.  The young ones especially see with untainted eyes.  Unafraid of mistakes or stupid questions, children are perfect in both their art and observations.  I watch them, as I watch George, who somehow retained this freedom throughout his 69 years, and I try to ease open my brain, relieving age-induced cynicism, prying even harder at my heart, that I might contribute in some way towards widespread sincerity. 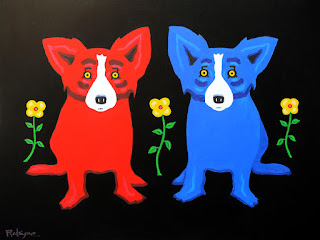 For about two years in the mid-1990s I played cards with an old Western character actor in the Carmel Highlands.  We met through a mutual friend, who arranged a rare introduction to this cowboy-hermit who, by his own admission, had not left his house since the 1970s.  I lost $40 to him on that first day, as we played cards on a rotting wooden picnic table overlooking the whales and Monterey Bay.  Suspecting I might not return, he struck a deal.  I wouldn’t have to pay, provided we never play cards for money again.  He acted in more than one hundred movies and TV Westerns and, although smoking unceasingly the marijuana he grew on his property, he remembered every card, so that my (sober) gin game no longer honored my grandfather’s memory.

From time to time, the big name actors stopped by to pay their homage or supply their stash, and I knew that, provided I remain calm and sworn to secrecy about the drugs, stars, and our rendezvous, I could stay.  Other than my mother, I kept my word until this essay and continue to keep my word regarding his name, although, honestly, you won’t know him, unless, like my mom and my husband, you’re a 1950s and 60s cowboy movie buff, in which case you might recognize his face from TV or possibly a big picture.

“Oh yeah!” said George, when I showed him a photo.

Like many men, the actor fell for my mother, and during her visits, they danced in the expansive property’s crumbling, dusty ballroom, as I swapped out waltzes on the turntable.

“I can’t believe you never told me,” said George this week as I recalled the story.

Although George and I dated during those years, I still kept the actor’s secret, because he didn’t want to meet my love interest.  “Artists!” he exclaimed more than once, eventually forbidding me to speak of mine.  He only wanted a card-player and her mother, and we, the three of us, rather liked the intrigue. 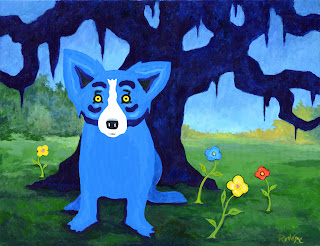 (pictured, I Have a Colorful Life, 2013 by George Rodrigue, 30x40, acrylic on canvas; click photo to enlarge-)

I write this morning to the “Welcome home!” of two great horned owls.*  Their lives too were disrupted, as only one owl visited for several years, now partnered again for the sunrise ritual at the edge of our pool, at this point more their pool than ours.  I’m sure they noted our return, but I wonder if they noted our absence.  And I wonder if they protected the property, keeping at bay the R.O.U.Ses.

The owls sing in chorus, delivering some message that I’ll probably grasp as part of the big picture in the future, because at this moment I’m too swept up in the details:  the fire warming the room, the memory of a cowboy who, as I just learned on-line, died eleven years ago, and the artist snoring softly beside me.

*for more on the owls, visit here-

Posted by Wendy Rodrigue Magnus at 11:53 AM