The Other Side of the Painting

Oftentimes it takes others to point out our achievements.  What begins as small and for oneself can become something else.  George Rodrigue paints today with confidence, sure of both his brushstrokes and direction.  His paintings are steps towards expounding his vision, whether within a specific series or his career’s oeuvre.

But this was not always the case.  In 1965 Rodrigue was a student at the Art Center College of Design in Los Angeles.  He learned from professional artists and, for the first time in his life, thought of art in abstract concepts, beyond illustration.  Although he also studied advertising design, his painting classes focused on fundamentals and technique, as well as the visual transmission of his soul, the impartation of mystery.  From his early twenties, art shifted from illustrating a specific idea to eliciting an emotional response. 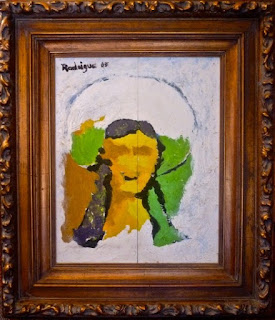 To create the untitled painting above (1965, 24x18), George Rodrigue, strapped for cash, rather than purchase a new canvas, glued together two pieces of thin, shiny illustration board. Normally, in presenting a design to clients, he taped his illustration to a press board, covering it with a two-inch matte to hide the tape.  Here, however, in a painting class, without concern for clients and their products, he created a makeshift canvas, backing the two pieces with a single heavier sheet of pressboard, all discarded materials from his class in advertising design.

Years later, he stapled the assembled pieces into an expensive, museum-quality frame. 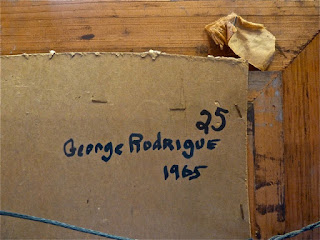 “As I started painting from the model on my glued-down illustration board,” recalls George, “the teacher asked me what I was doing and noted that, without a canvas, I should at least use a single piece of board.

“But I shrugged my shoulders and continued to paint.  After an hour or so, the same professor walked by and said, ‘Stop, it’s finished.’  So I did.”

The scenario was a lesson for Rodrigue.  Until this point, he looked at a finished painting, whether a portrait, landscape, or still-life, as best representing its subject, literally.  The assignment was simple:  paint the model.  And yet, in stopping when he did, George’s interpretation becomes a visual enigma.

For years, visitors to his studio, especially other artists, asked him when he would finish the painting.

“It’s finished, I told them.

“Something else happened.  My experience with this one painting helped me see the abstract, beyond the subject.  For that reason, it’s hung on the wall of my studio for the past forty-eight years.”

Similarly, I started blogging four years and four hundred essays ago mainly to answer the questions of students, collectors and journalists.  Musings of an Artist's Wife began as a source for basic information about the art of George Rodrigue, such as the story behind Jolie Blonde, the origin of the Blue Dog, and the pronunciation of the artist's name.

Yet from the beginning, George was my professor, seeing something else.  He encouraged me to drift away from rote answers and instead explore tangents, including not only my observations of his work, but also the nostalgia and perception unique to me and my life.  In a way, my audience also guided me, because, as I dared to share the personal and obtuse, those same stories, the ones with obscure references and unanswered questions, drew thousands of readers, oftentimes more than the literal Rodrigue specifics that spawned the blog in the first place.

Like George sitting down to an assignment to paint a model and nothing more, the blog became something else.  It’s as though we turned over the pieced-together, painted board and, like the other side of the hit record, found something unexpected, something important and true, and, just like the unfinished ‘finished’ painting, something that was there all the time.

-a new book, The Other Side of the Painting, published by UL Press, Oct. 2013 is now available for pre-order at your favorite independent bookstore or at amazon (click photo to enlarge)- 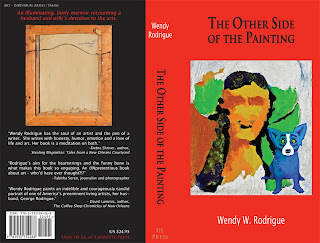 Email ThisBlogThis!Share to TwitterShare to FacebookShare to Pinterest
Labels: Other Artists, Schools, The Other Side of the Painting, Wendy