“What I like about the West,” said artist George Rodrigue last week as we navigated Houston rush hour traffic, “is that when you’re there, you’re by yourself.”

I posted this comment on facebook, and nearly everyone mistook the meaning, assuming George referenced central California, our home for awhile, maybe as long as two years, as we take a break from big city life and obligations. 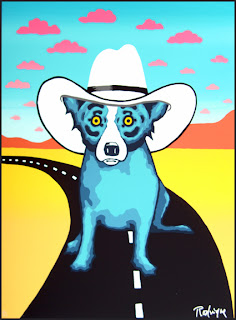 By “the West,” however, George meant “the Road,” as we resume our cross-country drive, an annual tradition for twenty years, missed only once, last year, when we lived instead in a Houston hotel.

Unaware of our reliance on this journey, our minds closed slowly over this past year, as our beloved New Orleans seemed louder, our responsibilities more numerous, and the return to wide-openness less accessible.  We pushed our journey back repeatedly, unable to justify our wants over the needs of those who depend on us.

At last, we began our freedom mid-week, with a brief stop in San Antonio.  As a student at Trinity University in the 1980s, I loved this city of culture, history, and color, but I forgot, having not visited downtown in 25 years, its beauty, both inside and out, as friendly folk and mariachi bands complement the Riverwalk. 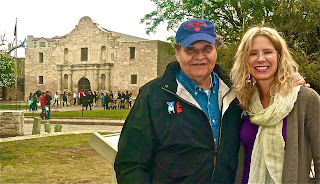 Only steps away from restaurants and music, we returned to Texas history, and I recalled my mother dragging me, sobbing, from the Alamo where, at age eighteen, I stood on the memories of Texans fighting for their independence from Mexico and read the words, “Victory or Death,” addressed by Lt. Col. Travis, “To the People of Texas and All Americans in the World,” just prior to his troops’ fateful fall to Santa Anna’s army. 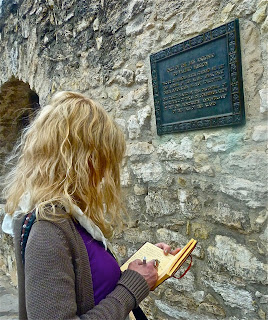 “Blood of heroes hath stained me; let the stones of the Alamo speak that their immolation be not forgotten.” –the Daughters of the Republic of Texas, 1936, commemorating the 100th year of the Battle of the Alamo-

This is why we cross America.  To remember.  To breathe with a deliberate exhale of relaxation, an inhale of fresh air, and a gasp of beauty and discovery.   We drive this country seeking a deeper grounding within our psyches.  Nothing inspires George Rodrigue more as an artist than these journeys, beginning with a freedom from commitments and the pull of well-meaning, copious plans.

“I’m so happy not to be on somebody else’s schedule – finally,” he sighed, somewhere in the middle of Texas.

Crossing into New Mexico on Good Friday, we paused in the small town of Hobbs for conversation and pie with the Robinson Family, the deliciously normal and giving provenance of Marney Robinson, Director of Education of our foundation, now fast at work preparing our Summer Art Camps.  Back in New Orleans, she makes us look good while we embrace her loved ones on her behalf. 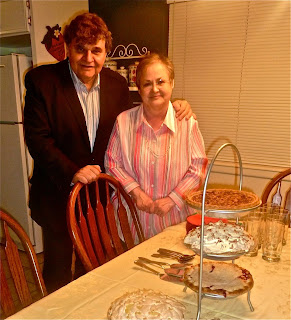 From Hobbs we drive miles of empty land, still dead from winter, but topped with bright blue skies and perfect white clouds.  We wonder where the Native Americans found shelter from the sun on these once buffalo-rich plains.  Did they carry the wooden posts for their tepees on their backs?  How did they manage the snowdrifts, the same ones held back by fences today?  We pause at Historic Markers, one every ten miles, and we exchange long stares with an antelope, alone, and the first horned one we’ve ever seen on the road. 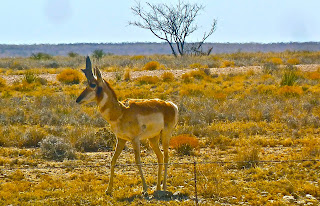 In the six hours from Hobbs to Santa Fe, we pass only one city, Roswell, home of alien encounters, somehow appropriate on this mind-expanding journey.

From our truck, we gaze across America as though we’re sailing across the ocean, towards a new day of possibilities, where anything can happen.

Let’s return to Louisiana once we miss it enough, we told each other. 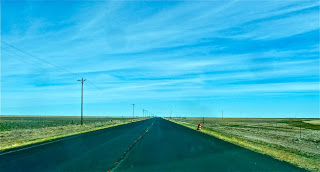 -click photos throughout to enlarge; all photographs by George Rodrigue-