Dance with Me, George!

Rodrigue recalls the country music legend on that day in 1983 as “a small, slightly built man with slicked-back hair and wearing a baby-blue jumpsuit."

"The minute he started talking, I recognized his voice.  I later learned that he moved to Lafayette to marry a local gal and live on a farm north of town.” 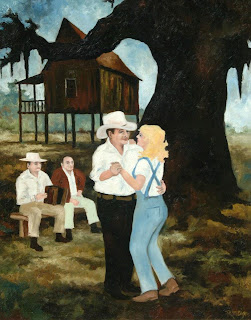 (pictured, Dance with Me Henry, 1989; oil on canvas by George Rodrigue; click photo to enlarge-)

The Arts cross over from music to dance, acting, and performance of all kinds.  In our house, the focus lies on the visual arts and writing; but all are forms of personal expression.  If one's lucky, one retains a voice like Jones or a style like Rodrigue, both distinctive and recognizable as theirs alone, something inseparable from not only their lives, but also their legacies.

In the painting above, Lennis Romero of the famous St. Martinville Romero Brothers, who performed for years beneath the Evangeline Oak, plays his accordion alongside Max Gregg, a Cajun storyteller and historian who ran a small Acadian Museum in the town.  A Port Arthur Texan, Jack Rains, dances with his Jolie Blonde at a Cajun fais do-do.

On this one canvas, the Arts integrate in paint, music, dance, storytelling, legend and style, brought together by George Rodrigue’s imagination and the unfettered Cajun culture.

“Dance with Me Henry is one of the first Rock & Roll songs I bought as a teenager,” recalls Rodrigue.  “My cousin Charmaine worked at the music store in New Iberia and picked out five 78-rpm records, including another favorite, Hearts Made of Stone by the Fontane Sisters.

“I was in the 7th grade, and I listened to those records over and over again.  The songs stuck with me, and I later paid tribute to the music and the memories in my paintings.” 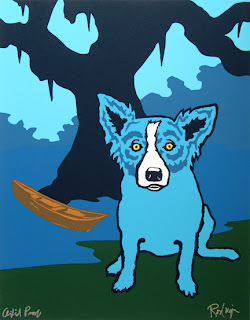 (pictured, Row with Me Henry, 1995; silkscreen by George Rodrigue)

Last weekend during the New Orleans Jazz and Heritage Festival, the Arts blended easily when Billy Joel, pictured below, stopped in the George Rodrigue Foundation of the Arts (GRFA) to play the Rodrigue Steinway, a 1913 piano donated and restored by Hall Piano Company and Steinway & Sons, and painted over three months last year by George Rodrigue.

Sponsored by and benefiting the LSU School of Music, this magnificent instrument mixes the musical and visual arts, reinforcing an important GRFA mission:  arts integration in education through Louisiana A+ Schools.

“I swirled music in paint along the sides,” explains George. 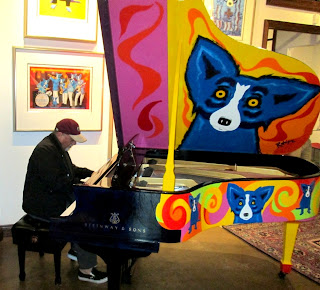 Also recently, as we twirled in George's Carmel studio to Stevie Wonder, thanks to our tech-savvy son Jacques and the Pandora radio now piped throughout our house, George recalled another story from his youth, one that sent me running for my pen.

“I was too young to drive, but I could dance,” he explained, describing a party and dance contest for the boys at New Iberia’s Catholic High and the girls at Mount Carmel.

“No one asked my cousin Cheryl to dance, so I did.”

Cheryl was great, I interjected, but she never struck me as an ‘I’ve got rhythm’ kinda gal.

“She wasn’t,” he continued, “but I had enough rhythm for both of us, and we won the contest!  Best of all, from the stage, as we accepted the trophy, I saw my parents watching through the window.”

George!, I exclaimed, imagining his conservative, aging parents, who so often seem disconnected in George’s memories from their only child and his art.  They were there the whole time?!

“I know.  And until today, I never told anybody that story.  Now quit writing, and let's dance!”