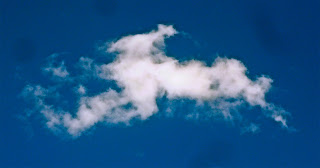 ...whispered artist George Rodrigue from the back door of our desert hideaway, speaking the first words from either of us in hours.  Within this southern Utah escape we study the sharp edge of mountains against the bluest blue sky at day, their shadowed outline at dusk, and at night, the Milky Way, embellished, as though not already spellbinding, with shooting stars.

Something happens in the silence of the desert that restores. 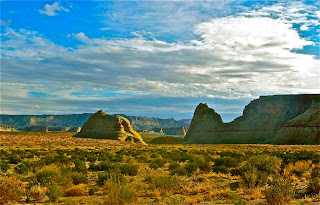 We arrived here two days ago, following eleven hours in our truck from Santa Fe, including a three hour detour over the Grand Canyon, forced by a northern Arizona landslide just twenty miles from our destination.  Unfazed, we followed the meandering alternate, off-highway route, towards the setting sun, all the more beautiful because we explore without a schedule, unobligated for the first time in several years to arrive at a certain place at a certain time. 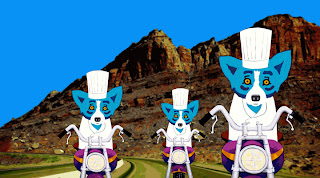 For George, as much a photographer as painter, the detour was a dream.

“The hardest thing to do,” said George Rodrigue as we reached the outskirts of Santa Fe, “is to capture in a new way what everyone else has done for the past one hundred years.  They were all here, Edward Weston, Ansel Adams, drawn by the light, the scenery, the pueblos, the history and architecture….drawn by the color within and beyond the Land of Enchantment.” 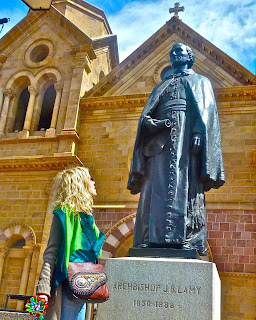 Our longstanding rules of the road include silence, with little music or phone calls, no reading or texting (by driver or passenger), and no books on tape or other distractions.  During our early cross-country travels, some twenty years ago, we sang Jimmy Swaggart and Elvis Presley spirituals, belted out to tapes purchased at truck stops along the way.  That tradition morphed into Bill Mack’s radio show and classic country, until finally we chose quiet most of the route.

I wondered while on the road this week at our gradual retreat into silence.  For years we sang “Peace in the Valley” and “Ramblin’ Man” as though the world should hear our song; yet at some point the music stopped.

I think it happened with sadness--- for me, after losing my mom in 2004, and for George because I no longer sang with him.  The sadness deepened after Hurricane Katrina in 2005 and the loss of George’s mom in 2008.  And yet this road trip, following the hardest year we’ve known, we eased out the phrases, not with our earlier gusto, but little by little, as Jessi Colter and Conway Twitty reentered our journey.  It was only a few lines at a time, but we slowly rejoined the carefree. 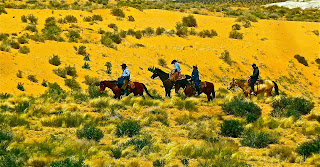 We share the experience of the road so that neither of us misses anything, whether crawfish-shaped cloud or tumbleweed, immersed in the American West, so that years later we recall together the details of the light on a particular day or the unexpected snowfall on spring blossoms.  I watch George and imagine the concepts swirling in his head for paintings, his easel replaced currently with his camera.

We mute our phones and computers, we close the television in a closet, and we whisper over dinner, as we study the shape of the mountains against the sky. Broken only by the soft drums at sunset and the water running for a bath, we embrace, with inspiration and gratitude, the quiet gift of the American West. 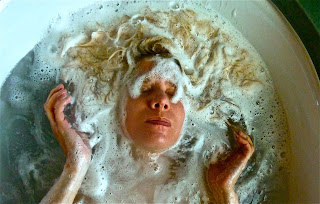 -click photos throughout to enlarge; all photographs by George Rodrigue, 2013

-for availability and pricing of the silkscreen Fast Food in Utah, contact Rodrigue Studio-

-more from us on the road in the story, “America the Beautiful:  Crossing New Mexico and Arizona;" also, see the links under "Rodrigue on the Road," "Rodrigue and Texas," etc, to the right of this post-