While walking on Carmel Beach last week, I stashed, a bit guiltily, in my sweater pocket, a stone.  It was cool and smooth and felt good in my hand, as I did what I always do when faced with a vista:  refocused.

It wasn’t until a few days later that I wore again my comfort sweater, the one I reach for during fogged-in mornings or bouts of melancholy.  I felt the stone in my pocket as I watered the herbs outside my office window, and I placed it among the plants and other treasures, most discovered in the trunk of my car and left, I suspect, by a visiting artist who walked the same beach. 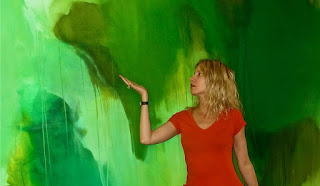 And I thought, as I often do in seeking a place of my own, of Virginia Woolf, who weighted her pockets with stones and, it must be said, drowned herself in the River Ouse.

Recently George Rodrigue designed a headstone for a friend.  It was his first such project, and to his surprise, the sentiment challenged him more than the artwork.  The territory is familiar, however, as he recalls working as a teenager in his father’s business, “Rodrigue’s Portable Concrete Burial Vaults.”
Sacred stones, whether over a grave, on the beach, or in a painting, haunt me lately, connecting me, without warning, to motherhood, or maybe more so to the sacred feminine.  As I write at my desk this week, I study the adjoining wall, covered with expressions of the feminine, including the feminine side of George Rodrigue. 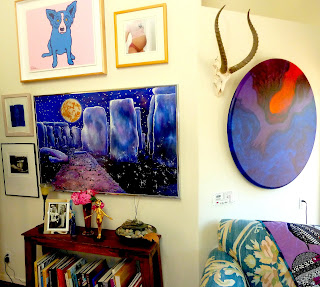 (pictured, Femme Fatale, a 1991 silkscreen with hand-painted eyes by George Rodrigue; Haley, a 2003 Hurricane painting by George Rodrigue; Pregnancy, a self-portrait photographed by Tabitha Soren; Ruth Bernhard’s Creation of 1936; an animal skull, found by a friend in the wild, in Africa; sculpture of Selket, my longtime obsession and the guardian of King Tut’s tomb; Sacred Stones, a 1992 painting by Mignon Wolfe)

In 1992 my mother painted Stonehenge.  She pondered, like many, spirituality within the shape and placement of the giant rocks.  For her, they embodied love in the form of lovers embracing within the shadow of one stone, and a fatherly face within another.  The stones symbolized her dreams, especially her connection to something bigger than a routine, daily life.

By the time she painted Sacred Stones, she explored in earnest, both in life and in art, the concept of the sacred feminine, specifically the ideas associated with Mother Earth and angels. 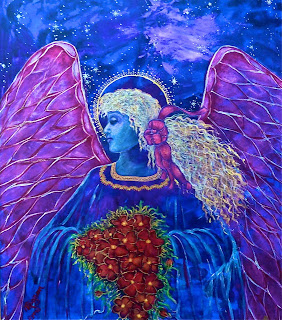 During Jazz Fest recently, New Orleans photographer Dennis Couvillion surprised me with an email of his photograph of Mahalia Jackson’s tomb, “in Providence Park,” he writes, “in Kenner, just off Airline Highway, which is in the photo's background, behind the trees and near the airport.” 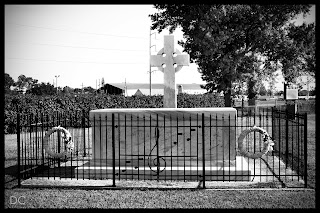 George and I both contemplate through Couvillion’s eyes the resting place of the great gospel singer, near-worshipped by millions as a mother-type figure, but also rooted in sadness and yet euphoric with the spiritual in songs like "Summertime and I Feel Like a Motherless Child.”

This contradiction and melancholy suits me on Mother’s Day, as it has every year since I lost my mom, even as I celebrate, wrapped in my comfort sweater, the maternal in dear friends and family.  This year in particular, I think it must be crowded at Mama’s side, as she reunites with my Aunt Kathy, George’s Aunt Irene, and his Cousin Berta Lou, beloved women, all mothers to their own and to us, and all of whom joined her in recent weeks.