Painted in 1971, The Breaux Bridge Band is a classic among George Rodrigue’s paintings.  Along with similar works from this period, it defines his style as a pictorial champion of the Cajun culture, recording snapshots of time within turn-of-the-century Southwest Louisiana.  Ironically, however, it is only on the artist’s canvas, and not in reality, that this band connects Acadiana’s heritage to the music that today, along with Cajun food and joie de vivre, characterizes a culture.

“There really was a Breaux Bridge Band around 1900,” explains George Rodrigue, “but it was called a ‘Classical Music Band.’  They were very popular at the time.  The members were Cajuns and Europeans, and their repertoire was classical.  It had nothing to do with Cajun music.” 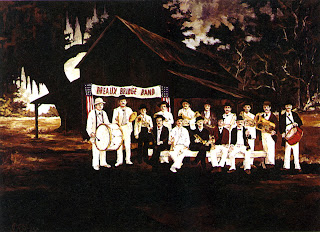 (Author’s note:  Sadly, this is the best photo we have of this important work, a canvas full of blending and nuances, and without the solid black areas visible here.  Tracking down these early paintings and arranging photography with the owners is an on-going challenge.  As a comparison, see the blog posts describing the Aioli Dinner, The Mamou Riding Academy, and Broussard’s Barber Shop, all from the same period and all recently photographed with the latest technology-)

A Breaux Bridge native whose grandfather was in the band gave George a photograph in 1971, knowing that he researched local traditions for his paintings.

“She was a self-proclaimed Breaux Bridge historian,” says Rodrigue.  “Many of us feared that the Cajun culture was dying, and we each tried to preserve it in our own way.” 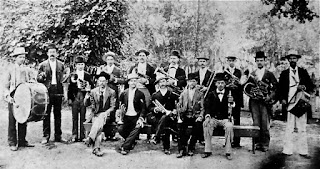 The Breaux Bridge Band belonged to a series of four paintings that included the Aioli Dinner, the Mamou Riding Academy, and Broussard’s Barber Shop, all part of George Rodrigue’s first series of prints made from paintings.  Without a gallery or agent, he listed his home telephone number in ads featuring these images for Apollo Magazine out of London, an impressive periodical full of European antiques and art.

“One day a guy from New Orleans called my house,” recalls Rodrigue, “wanting to know why an unknown Cajun artist in Lafayette was running ads in the premier international arts & antiques magazine.  At the time, I was the magazine’s only American advertiser outside of New York City.  He was so impressed that he bought the original Breaux Bridge Band.”

The four paintings also formed the basis for Rodrigue’s landmark publication, The Cajuns of George Rodrigue, the first book published nationally on the Cajun culture.  From the book:

"Looking at them, one can see how proud they were to be musicians.  During the week they were all farmers, but on the weekend they felt like they were contributing to, I think, America, doing something no one else was doing.

"I guess this was true at the turn of the century when the Breaux Bridge Band was rehearsing at this barn." -George Rodrigue from The Cajuns of George Rodrigue (Oxmoor House, 1976); learn more about this important book here- 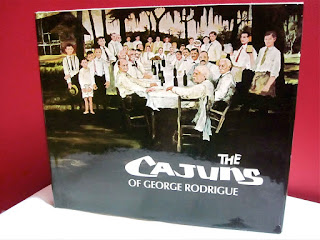 Each of these classic images sparks memories for George, not only the long hours it took to paint them, but also his personal nostalgia related to the subject matter:

“I started going to Breaux Bridge in high school (1959-1960), because the town was open on Sunday night.  You could drink alcohol and dance at the clubs on the Breaux Bridge Highway, the road from Lafayette. The white nightclub was on one side of the road, and the black club on the other.  The musicians performed back and forth between them.

“The bands alternated between rock-n-roll and swamp pop. I saw Clarence Frogman Henry, Irma Thomas, and Fats Domino.  I remember that while singing, Fats played the piano with one hand and signed autographs with the other. 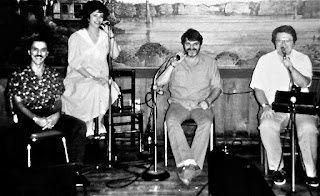 (pictured, Kerry Boutte of Mulate’s, Beverly Friedman, George Rodrigue, and Steve Friedman of NBC, pose at Mulate's in 1988 for a photograph that would eventually become a Rodrigue painting; the Friedmans were in Southwest Louisiana from New York City, celebrating the Cajun Mardi Gras for a segment on NBC’s Nightly News; click photo to enlarge-)

“My good friend Kerry Boutte,” continues George, “bought Mulate’s and transformed the bar into a Cajun restaurant and dance hall.  He single-handedly brought back Cajun music.

“Kerry told me that the first week the bands played, no one showed up.  Eventually, however, the word spread, and even the national press took notice.  Zachary Richard, Octave Clark (the subject of this year’s Breaux Bridge Crawfish Festival poster), Michael Doucet and Beaujolais, and hundreds of Cajun bands played there over the years. It became the place for Cajun music, while also sparking the revival of Cajun food.”

George Rodrigue’s paintings and prints hung in Mulate’s almost from the beginning.  Today, although the original Breaux Bridge Mulate’s is gone, Kerry Boutte and his family own Mulate’s, the Original Cajun Restaurant in New Orleans, where the music and dancing continue.

-as with The Breaux Bridge Band, Rodrigue’s Mamou Riding Academy and Broussard’s Barber Shop are also in private collections; the Aioli Dinner, however, is currently on view at the Ogden Museum of Southern Art-