“We mortals are but shadows and dust.” –Proximo, Gladiator

Recently, while shopping for skinny jeans and day-glo tees with my sister and cousin, I time-warped to the 1980s when flashy jewelry, exaggerated shoulders, and acrylic fingernails prevailed.  For a while, subtle feminine style seemed lost forever.

George Rodrigue has never been subtle, in his ideas, personal style, or on his canvas.  His earliest oak tree paintings drew criticism for their dramatic contrasts of light and dark, and he exaggerated a primitive look to his Cajun figures, emphasizing the unique culture of his ancestors over the established rules of art.

The older he gets, the bolder he becomes, rejecting soft colors in favor of bright primaries and, recently, rejecting the flat white canvas in favor of a reflective sheet of silver metal. 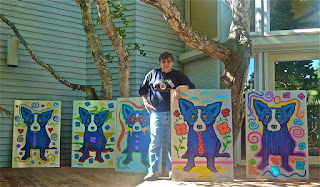 (pictured, George Rodrigue at his studio in Carmel, California, 2013; mixed medias on chrome are 48x32 inches-)

At first, I related this shift to George’s fondness for 1950s nostalgia, similar to my renewed interest in the 1980s.  One look at the shiny accents in the newly renovated New Orleans gallery, along with Rodrigue’s recent tribute to Marilyn Monroe, suggests that Happy Days are here again. To my surprise, however, George relates the chrome not to the 1957 Cadillac Coupe DeVille, but rather solely to the visual, to the shiny nature of the substance.

“Several years ago,” he explains, “I painted around printed Blue Dogs on chrome paper, allowing the silver to show.  I created these for children’s hospitals in Texas, with the idea that patients would walk up to the dog and see themselves reflected alongside it.”

Today, that concept is part of “Art for Healing,” a program of the George Rodrigue Foundation of the Arts, installing similar works in hospitals in Louisiana, Tennessee, and Texas.

“My most vivid childhood memory,” recalls George, channeling the 1950s at last, “is of rows of kids in iron lungs in hospital wards.  I was lucky to fully recover from polio, but I still have that image in my mind.  I want children in today’s hospitals to remember something happy.”


Pleased with these large-scale works (7-10 feet), Rodrigue researched other materials, hoping to expand his use of the reflective surface.

“After creating the hospital pieces on mounted chrome paper," explains the artist, "I tried embellishing a dog on a real sheet of metal. Afterwards, I coated the metal three times with automotive sealer, enhancing the shine, so that the Blue Dog and additional hand-applied paint appear to be baked into the chrome. 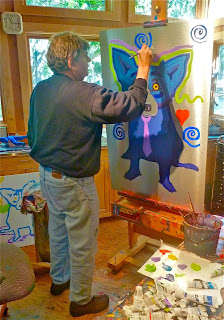 “It reminds me of the old-time porcelain signs, the type I’ve collected for thirty-five years."

These newer works on metal are more shiny than mirrored, with colors so bright and intense that they don’t duplicate in photographs.  The computerized images shown here only suggest the actual works, now on view in Rodrigue’s galleries, where one sees hints of life reflected in the unpainted metal.

Unlike the mirror-like hospital pieces, these new works merely whisper surrounding color and movement, all subjugated to Rodrigue’s staring dog and strong design. 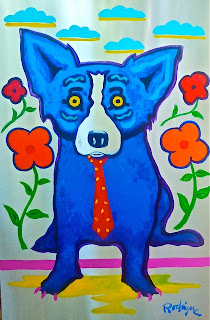 After silkscreening the dog on a metal sheet, Rodrigue uses heavy acrylic paint, spacing his design like a puzzle.  Unlike earlier, playful mixed medias on silkscreen paper, these new works are deliberate and structured, without drips or chance.  In the painting’s reflection, we, the viewers, are fleeting shadows around Rodrigue’s shiny, happy* Blue Dog world.

Similarly, although I recall my mom as 1980s fashionably flashy, with seashells, feathers, and crystals assembled (using a hot glue gun) on twisted ribbons around her neck, recently, while in the shower, I glanced by chance into George’s shaving mirror and, in my wet plainness, saw not my own face, but my mother’s, staring. 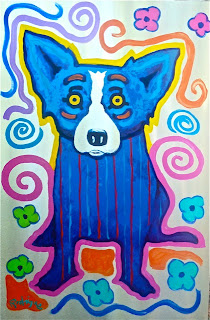 My distinct features, such as they are, disappeared in the face of her intense ones.  Although near-blind without my glasses, I studied her clearly, my nose two-inches from the mirror, a shiny, happy, curious presence.  The water and tiles faded behind me, indiscernible as anything but shadows.

*the word ”happy," when used in this blog to describe the art of George Rodrigue, never means “whimsical”-