A Blessed Life (An Irish Angel)

Last summer was challenging, as George Rodrigue faced an advanced lung cancer diagnosis and several months of treatment in Houston.  Last fall, with his disease in remission, we tied up loose ends in New Orleans and prepared for a West Coast sabbatical.  This spring, we spent weeks on the road, exploring America as we’ve done every year in the past twenty, but one, arriving in central California mid-April, indefinitely.

Summer 2013 also has its challenges.  We paint a rosy picture on facebook and in photographs, but anyone who knows such health concerns understands that there’s no quick or guaranteed fix.  Remission, we learned, means living with cancer, even after successful treatment.  It means ongoing tests, occasional setbacks, and unpredictable side effects.

“Having a job where basically I sit all day and paint, using my brain without physical exertion,” explains George Rodrigue, “fits perfect with me.  Most days it’s like I never had cancer at all.” 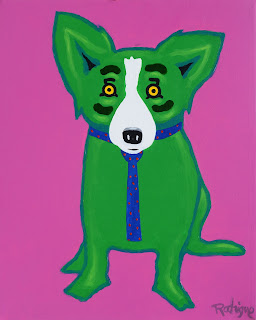 We embrace good days with excursions to beautiful Lake Tahoe or Big Sur and quick trips with fine dinners in Las Vegas.  On slower days, most days, we osmose nature in our Carmel Valley backyard, where the sun sets over the Santa Lucia Mountains, and the lace oaks define our view.

Throughout it all, George Rodrigue paints, mindful of his lessened stamina, but returned, as much as possible, to his easel.

Without question, George and I lead a blessed life.  We have wonderful friends and a loving family, both immediate and extended.  We make a good living within the arts, our professions and lifes' pursuit.  We marvel often that somehow on our individual journeys, one a product of 1950s New Iberia and the other of 1970s Fort Walton Beach, we found each other.

All of it together is more than luck, I know.  It’s a product of some kind of grace, far more than we deserve.  This we both know. 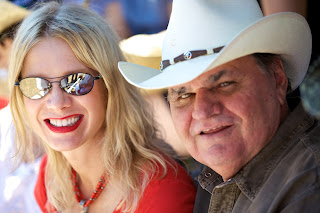 (pictured, July 2013 at a rodeo in Lake Tahoe; photograph by Kevin Vogt-)

While dating, George and I drove, as often as possible, the Pacific Coast Highway between Carmel and Big Sur, the rented convertible's top down and the early 1990s New Age Irish sounds of Enya and Clannad surrounding us at full volume.

My mother, a now-credited muse,* sent me the music, suspecting the romance long before we told her or anyone.  As a child, I explored often not only her favorite music, Neil Diamond, Don Williams, and Simon & Garfunkel, but also the printed treasures within her bookcase, a large collection she carted from country to country since college, as she transferred, according to orders, with my dad, an officer in the United States Air Force.

From the beginning, her European art books helped shape my course in life, as we discussed together the Rubenesque nude and Picasso's genius.  At age thirteen, halfway through Shirer’s The Rise and Fall of the Third Reich, which I snuck in secret from the shelves, I sunk into my first depression, jolting my mother into a reaction best saved for my diary.  At age sixteen, I memorized and quoted love and life lessons by Kahlil Gibran; and throughout it all, I lightened the mood with the Irish spirit of Ogden Nash (1902-1971, of Baltimore and New York), a collection I pulled again recently from the shelves.

“In the Vanities, No One Wears Panities,” wrote Nash.

I’ve never been to Ireland.  My mother, a world-traveler, longed to visit, but she never made it either.  Her maiden name, McClanahan, is Scottish, but it’s Ireland that called her, eventually passing Greece and Egypt on her bucket list.

I write often of my NYC museum visits with my Irish friend Emer Ferguson.  Together we explored Degas and Litchtenstein at the Morgan Library, miniatures by the Limbourg Brothers at the Metropolitan, and the Irish Dan Flavin also at the Morgan. Emer addicted George and me to Irish butter, Cadbury chocolates, and Irish coffee with real whipped cream.  She filled our bookshelves wih Colum McCann, Anne Enright, and, my current obsession, The Granta Book of the Irish Short Story, companions to both my mother’s and George’s art school collections.  Within each gift she includes her notes on the text, providing the added prize of a guaranteed good read. 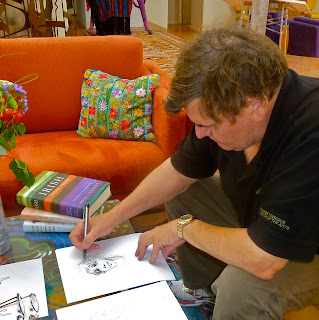 (pictured, George sketches at home in Carmel, California, alongside a few gifts from Emer; click photo to enlarge-)

Other than a brief trip to Canada, George Rodrigue and I have not left the United States since 2005.  Prior to that time, we traveled often to Europe and Asia for a mixture of business and pleasure, combining vacations with exhibitions of his artwork. However, since 9/11 and Hurricane Katrina, we appreciate more our magnificent country.  Rather than long trips abroad, we drive across America.

Recently, we feel the international travel pull again.  This time, Ireland is on our radar.  With our friends Jack Lamplough and Emer Ferguson, we hope in the coming years to explore Emer's homeland.  Now more than ever, we feel the need for this journey, tracking down an Irish angel, visiting America on her honeymoon, who leapt from a crowd last week and, there is no other way to say it, saved George’s life. 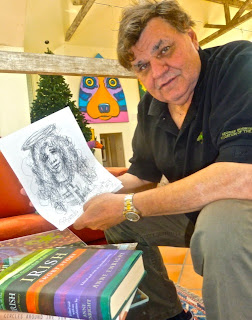 
....I told this stranger, through my tears, as three hundred people looked on.

We learned later that a rare side effect of his medication caused George to faint and his heart to stop beating.


...insisted Mrs. McBride of Ballymoney, after he coughed, after her fourth chest compression, as she threw all of her weight onto his ribcage.


...he called out, in an exchange we laugh about…

…now that things are normal again.

My mom, Mignon McClanahan Wolfe, loved the music of Loreena McKennitt, the Canadian-born musician of Irish-Scottish descent.  When my sister and I packed up her things, we found “Dante’s Prayer” on our mother’s stereo.  Like a 1980s radio request, this song goes out "To Brenda."


...said Mignon,* laughing, as she quoted a few Ogden Nash favorites in the last week of her life.  And I made a promise that, unknown to me at the time, I would not be able to keep.

*I dedicated The Other Side of the Painting, a book based on this blog, to my mother, “To Mignon, who named herself after a French actress.”  All proceeds benefit the arts education programs of the George Rodrigue Foundation of the Arts; details and pre-orders here-

-near New Orleans this fall?  Please join me for "Coffee & Conversation" on October 16th, hosted by the Tennessee Williams Literary Festival and the Jefferson Parish Library.  Details here-