Following Hurricane Katrina in 2005, George Rodrigue, like many New Orleans artists, sought temporary venues for his work.  Even after the Rodrigue Gallery reopened in January 2006, it was several years before tourists returned strong to the city.  Local artists depend on this exposure to sell their art.

In addition, although George and I experienced only minor damage to our Faubourg Marigny home, members of our staff did not fare as well.  While they struggled with insurance companies, F.E.M.A., and, in several cases, losing everything they owned, we hoped to reassure them with employment and a steady income.

At first, Rodrigue’s program, Blue Dog Relief, pre-occupied us.  The prints raised funds for humanitarian and arts organizations on the Gulf Coast while satisfying our need, as well as the need of our staff, to help in some way. However, we also longed for distraction and normalcy for our stressed co-workers, all of whom worried for their families, their jobs, and their city.

George found the answer far from home, in Aspen, Colorado. 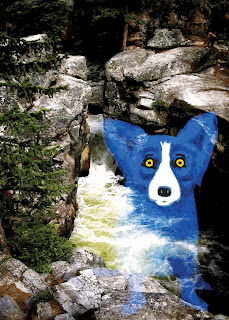 In Aspen, we rented a location for three years and rotated the Rodrigue Gallery staff on two/three month shifts.  In most cases they brought their families and lived, temporarily, in this Rocky Mountain paradise.

George and I remained mostly in Louisiana; however, several times each year we visited Aspen, delivering paintings and enjoying our own brief escape.  While there, George researched the area using his camera. Back in New Orleans, he manipulated and cropped the photographs, eventually creating four silkscreen prints. 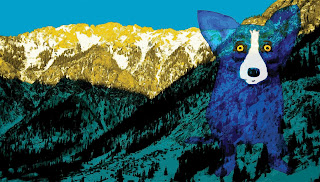 “Photography has been a part of my creative process for a long time,” explains Rodrigue.  “As I look back over the last forty years, I realize that I have worked basically the same way the entire time.  For my early Cajun paintings I photographed models, then used my photographs as sources, ‘arranging’ the images within them in different ways in order to best portray whatever folktale was my subject.

“In these four silkscreen prints, all created in 2007, I’ve used the camera in a similar fashion.  First, I went to the Rocky Mountains and made hundreds of photographs of the sky and landscape during each of the four seasons.  After studying and playing with these images for a year or so, I was ready to make silkscreen prints that incorporated the Blue Dog shape.” 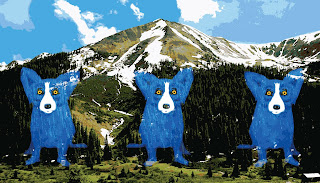 “I fused the two images together in a way that showed the Blue Dog emerging from and yet belonging within the mountains and trees.  The Blue Dog becomes a part of nature, with the landscape revealing itself through the dog’s shape.

“With today’s technology, the computer has given me hundreds of variations with which to work---in an almost collage-type construction.  These are the first four silkscreen editions I made using this new process.”* 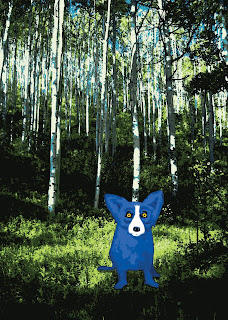 Since these Rocky Mountain images, Rodrigue expanded this technique, exploring large-scale similar artworks on metal in series like Swamp Dogs (2011) and Hollywood Stars (2013). Although these recent works pay tribute to Louisiana and the Silver Screen, it was silkscreens such as Take Me Home and Wash My Blues Away (pictured above) that planted the seed.

“Living off and on in Aspen for three years,” reflects the artist today, “we became more aware of John Denver’s 'Rocky Mountain High' and what that really means.  I was very inspired to produce something connected to the area.”