It’s twenty-five years since George Rodrigue last drank alcohol,* and yet he was part of one of the most successful stories in advertising history, promoting a vodka.

“Even when I did drink,” laughs the artist, “it was always bourbon or wine.  I never liked vodka.” 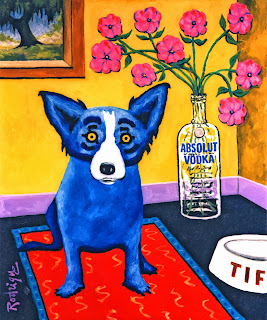 Rodrigue’s reasons for participating in the famous Absolut Art Campaign had nothing to do with promoting alcohol.  Rather, like the Xerox Campaign of 2000, he found the art and advertising synthesis tempting and, from the beginning, impossible to pass up.

Absolut Art aligned Rodrigue, through Carillon Importer’s Michel Roux, with the advertising tradition he embraced at the Art Center College of Design in the 1960s and, more important, with the art tradition started in 1985 by Roux and Andy Warhol.

“It was Roux’s longtime friendship with world-renowned Andy Warhol that fostered the creative genius behind the 1985 ‘Absolut Warhol’ ad campaign.  This was the first time a marketing campaign was focused around art.” –from the M.P. Roux website- 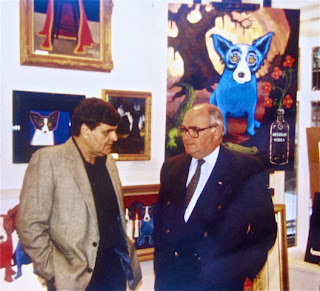 For years, even prior to the Blue Dog paintings, Rodrigue walked a line regarding commercialization within his art.  With his Cajun paintings, he illustrated cookbooks, printed thousands of festival posters, and produced Jolie Blonde Beer.

With the Blue Dog, he proceeds cautiously, avoiding products and mass-production of his art, rationalizing otherwise commercial ventures, such as posters for the New Orleans Jazz & Heritage Festival, labels for Amuse Bouche Wine, and on-going publishing projects, with an adherence to art traditions.

In the case of Absolut Art, this happened by accident, as Rodrigue painted for an audience at the request of his friend Paul Prudhomme during the chef’s hometown festival.

“When I first met Michel Roux," recalls Rodrigue, "I didn’t know who he was; he was just someone else in the crowd, under a tent in the Opelousas town square.  At the end of the 3-day weekend, I loaded my painting, a triptych of three giant dog heads, in my truck, having no idea what was about to happen.

“Michel Roux approached me in the parking lot, hoping to buy the canvases for Carillon Importers as the artwork representing Absolut Louisiana.  I knew the Warhol campaign but had my own ideas for the imagery, creating a new design over the next several weeks, incorporating an alligator and oak tree with the Blue Dog and bottle, which I included as a vase for flowers rather than a container for alcohol.” 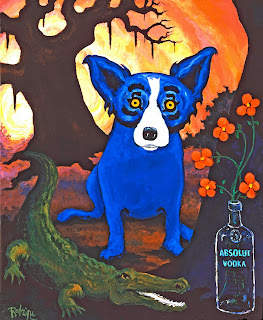 Absolut Louisiana appeared full page in USA Today in the fall of 1992.  The four hundred prints sold out in a matter of hours, with all proceeds benefiting the American Cancer Society.  It was touted at the time as the most successful image of the Absolut Statehood Campaign, with most prints sold at 30,000 feet, from airplane telephones.

Following this success, Roux commissioned Absolut Rodrigue, pictured at the top of this post, an image featured multiple times in nearly every major U.S. and international magazine beginning in 1993 and continuing for several years following.

Rodrigue and Roux became friends during this whirlwind campaign, and when Carillon Importers launched Royalty Vodka in 1995, Roux approached the artist again.  His Three Masterpieces was a natural, combining Roux’s blue vodka with Rodrigue’s Blue Dog and Gainsborough’s Blue Boy (1770), all revealed on canvas behind a curtain. 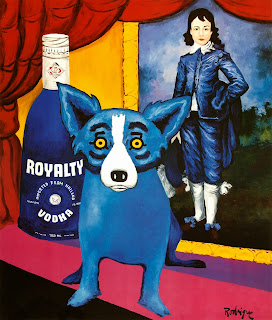 Although the vodka fell through, the painting premiered, along with the Blue Dog Hog and the landmark book, Blue Dog, in the fall of 1995 at a Rodrigue exhibition at The Time is Always Now Gallery in New York’s SOHO.  I recall Three Masterpieces appearing almost small, yet holding its own, in the warehouse-type space filled with Rodrigue’s giant Blue Dog canvases, some as large as 8x12 feet, his first works at that scale.

Rodrigue’s artwork for Michel Roux and Carillon Importers is a highlight in his career.  The campaigns place him in an art tradition that includes not only Andy Warhol, but also Keith Haring, Ed Ruscha, and many others, culminating in a permanent exhibition and tribute to the blending of art and advertising at The Museum of Spirits in Stockholm, Sweden.

*Rodrigue gave up alcohol in the late 1980s after he was diagnosed with hepatitis brought on by breathing in paint varnishes; story here-

-George and I hope to see you on tour this fall; new dates posted here-