‘Round about, round about,
Lo and behold!
Reel away, reel away,
Straw into gold!’*

All my life, I’ve been drawn to women older and wiser.  I like to imagine my grandmothers, although long gone, as young girls, and I stare hard into the faces of friends, some now in their 80s, sure that I see youth, even child-like innocence, in their eyes, even as I value their advice and experience. 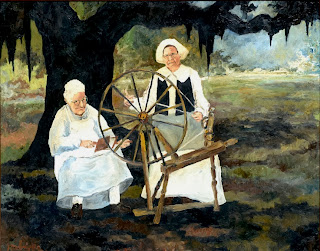 I wrote in The Other Side of the Painting about Gladys, an elderly woman I befriended by chance at the grocery store while a student in San Antonio in the mid-1980s.  I read carefully several years ago George’s mother’s day-by-day account of his parents’ courtship, recorded within her diary during the mid-1920s.  And I recall often for young women a story from my own stockpile of wisdom, recounting my Granny Wolfe’s reaction to a romantic break-up not long before George and I began dating:

“But you’re twenty-five!  Who’s going to want you now?”

Although I laugh today about the scene and its meaning, at the time, I caused my grandmother great distress, as I refused to do as she asked and,

“Call him! Beg him! Make him take you back!”

Nevertheless, I weighed her advice carefully, respecting the opinion that came from her 101 years.

George Rodrigue also embraces this wisdom.  He preserves these scenes within paintings, illustrating his mother’s 1924 school class and other early snapshots, such as Boudreaux in a Barrel, elucidated in his own way from the tiny black and white photographs in Marie Courrege Rodrigue’s album.  He also appreciates these scenes from other Cajun families, recreating them on his canvas within family portraits and paintings of nineteenth and early twentieth century Acadian life. 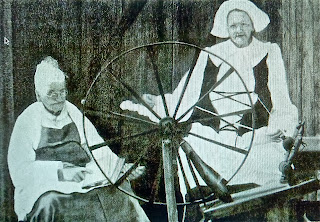 “General Dronet of Erath brought me a photograph some thirty-five years ago of his grandmother and great-grandmother,” recalls Rodrigue.  “He asked me to consider a painting of this important slice of Acadian history.  I saw immediately that this was an iconic image, and I reinterpreted it in my Cajun style.”

Warren Perrin, Co-founder of The Acadian Museum and Past-President of CODOFIL (Council for the Development of French in Louisiana) recalls Madame Dronet, who...

"...sold her unique textiles from her home to help support her family.  From her dedication to the precious cultural craft, Col. Dronet acquired an early appreciation of his ancestral roots.”

George Rodrigue grew up an only child; however, he was part of an elderly and large extended family, with older parents who were each the youngest of their combined twenty-six siblings. 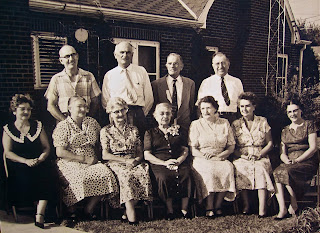 (pictured, the Courrege brothers and sisters on the lawn of the house built by George Rodrigue, Sr.; George's mother, Marie Courrege Rodrigue, who lived to be 103, sits far left; New Iberia, Louisiana, 1955; click photo to enlarge-)

It was the fading Acadiana, as remembered by his parents, aunts and uncles, that Rodrigue preserved, beginning in the late 1960s, on his canvas.  This includes not only genre scenes from photographs, but also imaginary scenes, particularly of Louisiana landscapes, as idealized by a Cajun artist’s eye. 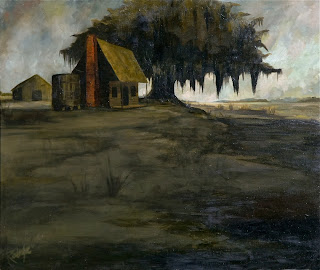 In a sense, Rodrigue inserts his own ancestral wisdom and unique vision onto his canvas just as a spinner might within a quilt.

Dronet describes his grandmother Therese Meyers Dronet (b. 1871) as “the best-known Acadian textile artisan” who “learned to spin and weave by candlelight from her grandmother at the early age of eight.”

“While her mother, Anaise, would ‘card’ the cotton, Therese would spin the yarn on the spinning wheel, as had been done by the Acadians for two centuries.

“She produced an extensive and handsome collection, including bedspreads ‘courte pointe,’ rugs, blankets, quilts and handbags.  Her pride and personal preference, however, was the ‘courte pointe’ (bedspread) expemplified by the ‘cross and diamond’ in a cordonne, boutonne work-syle.

“In 1929, a ‘courte pointe’ woven by Madame J.B. Dronet was included in a gift of Acadian textiles presented to the nation’s First Lady, Mrs. Herbert Hoover.”


-from A Century of Acadian Culture, The Development of a Cajun Community:  Erath (1899-1999) by General Curney J. Dronet, The Acadian Heritage and Culture Foundation, Inc., 2000 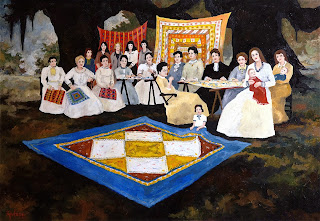 “Goose quill toothpicks, Wendy, that’s what I need!” declared a wise friend recently, her eyes sparkling like a young girl's.

Where do I find them?

“Look up ‘apothecary’ on your iPhone.” 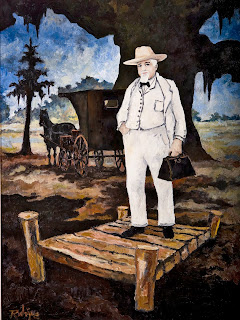 “And while you’re at it,” she continued, “find me an old-fashioned doctor.... one with real experience!”

I’ll do my best, I promised, even as I knew that, like the early spinners, we’d have better luck finding such a doctor on George’s canvas than we would on google.

*"Rumpelstiltskin," from Children’s and Household Tales, 1812 by the Brothers Grimm-

-in the book, The Cajuns of George Rodrigue (1975, Oxmoor House), Rodrigue interprets these Cajun scenes not only with imagery, but also with descriptive text written in both French and English; learn more here-