“The artist is involved with art as a way of life.”*

George Rodrigue and I discuss often the definition of art.  We study the roles of craft, commercialism, high and low art, concluding always that there is no definitive answer, but that the fun ---indeed the tradition--- lies in the debates.

Ideally, art reflects the artist's soul and stimulates a personal connection for the viewer.  While creating, however, the artist exists in a solitary place, separate in both thought and actuality from the opinions and influence of others.

“I see no need for a community,” stated artist David Hare (1917-1992).  “An artist is always lonely.  The artist is a man who functions beyond or ahead of his society.” 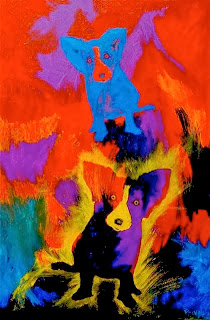 This week George and I read together the transcripts from Studio 35, specifically a three-day gathering in 1950 of Abstract Expressionists (although they debated that label as well), including Hans Hofmann, Robert Motherwell, Louise Bourgeois and a few dozen others.  During these closed sessions, the artists debated terminology and addressed questions such as,

How do you know when a painting is finished? Is it better to title a painting or give it a number? Should artwork be signed? Can a straight line be considered a pure expression? 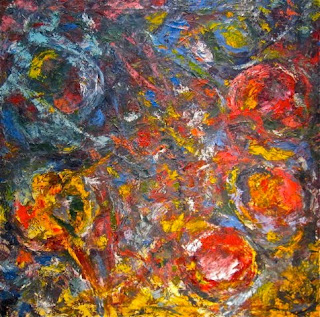 Their comments spanned the width of their minds, as they blended experience, contemplation, and personalities.  I asked George the questions too, because I recognized in these artists similar approaches to his own.

….and from George Rodrigue:

“My favorite painting is always the one I’m working on now.”


When discussing how to know when a painting is finished, several artists spoke of the need for multiple works.

“That’s why you have to study ten to fifteen paintings together,” interjected George, as though he sat in on this session.  “If one stands off from the others, then you’ve overworked it, and it’s too much.

“The group is more important than the single canvas, especially when it comes to learning how to stop.  Looking at the group is the only way to see what you’re doing.” 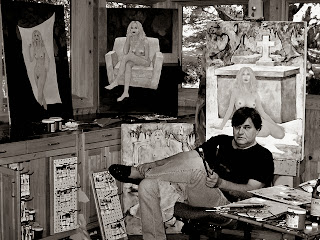 Regarding process and philosophy, the group never agreed, reaffirming the personal nature of art.  They all agreed in their dismissal, however, of not only public popularity, but also museums and academia, an irony given their status on all fronts today.  George, too, lumps these audiences together:

“If you try to paint to please a public or a critic,” says George, “you’ll never create anything lasting, anything new, or anything purely your own.”

This attitude dictates approach.  In George’s case, for example, he ignores outside perception (most often, too many Blue Dogs, or for years, too many Oaks), in favor of what he knows to be true regarding the challenges in repeating these subjects.  For him, as he works within this four-sided canvas environment, shapes and colors are king.  It is because of this abstract approach that he never tires of his subjects.

“One shape in relation to other shapes makes the ‘expression;’ not one shape or another, but the relations between the two makes the ‘meaning’.” –Hans Hofmann (1880-1966) 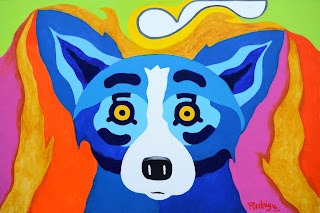 By the time George reached art school in the 1960s, his professors spoke of “the death of easel painting.”  The same museums and academic elite that once eschewed the Abstract Expressionists now revered their movement, pushing it to the forefront of popular culture as well.  Pop Art was the new guy on the block, dismissed in the same way as its predecessors. 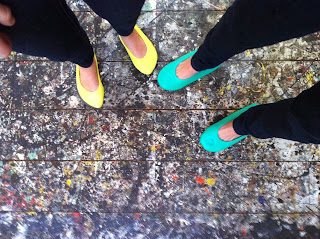 “I can tell by their questions that these are all artists from the 50s,” continued George about the Studio 35 sessions.  “As time went by, the questions answered themselves, because the progression of art – not the artists themselves – dictates the direction.”

-visit this link for the latest reviews of The Other Side of the Painting, published October 2013, UL Press-

Posted by Wendy Rodrigue Magnus at 10:10 AM