In 1968 attorney and former Louisiana State Senator and U.S. Representative Jimmy Domengeaux* (1907-1988) of Lafayette founded the Council for the Development of French in Louisiana, known as CODOFIL. Impressed with the initiative, Louisiana Governor John McKeithen pushed through a bill that granted the organization the necessary state credentials. 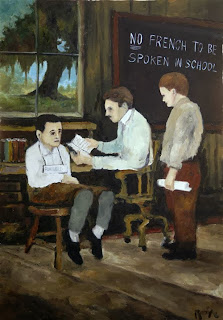 (pictured:  In 1912 Louisiana Governor Hall issued a special edict that French could no longer be spoken in schools; George Rodrigue’s He-bert, Yes – A Bear, No is one of fifteen paintings from his Saga of the Acadians, 1985-1989, detailed here-)
In order to save the French culture in Louisiana, Domengeaux, CODOFIL’s president from 1968 until his death in 1988, championed the French language, reintroducing it into the state’s public schools. Through an ambitious plan, he imported teachers from France and Canada to Louisiana and, remarkably, convinced the French government to fund the program.
The first one hundred and fifty applicants chose between two years in the French army and two years in the small town parishes of Louisiana. They lived in private homes and taught the proper French, as opposed to the Cajun dialect, a controversial decision that resulted in mixed and prolific press for Domengeaux, whose bigger-than-life persona attracted considerable public attention.

“He was sarcastic, flamboyant and crude,” explains artist George Rodrigue about his old friend, “and he was desperate to preserve the unique culture of south Louisiana, just as I tried with my paintings.

“We got along great.” 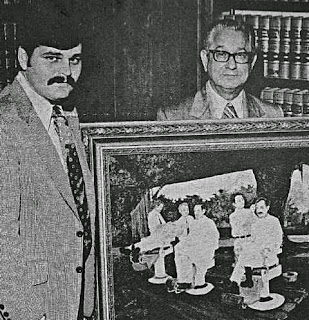 (pictured:  Rodrigue and Domengeaux with Rodrigue’s Broussard’s Barber Shop, The Lafayette Daily Advertiser, 1971-)
It was Domengeaux who told George about Cora’s Restaurant, a combination grocery store, boarding house, restaurant and bar located during the 1930s and 1940s in the country outside of Lafayette.

“There’s no record of these old places,” explained Domengeaux.

George painted the long-gone establishment using his imagination, but based on his friend’s description. According to Domengeaux, the restaurant’s cuisine was more Creole than Cajun. Known for great food, Cora’s and places like it were unusual because of their diversity, attracting Cajuns, Creoles and African Americans.

The place employed a large staff, including children, most of whom boarded on the property. For the painting, George invented the people, recreating them in his typical Cajun style, all in white, without shadow, and locked into the landscape. 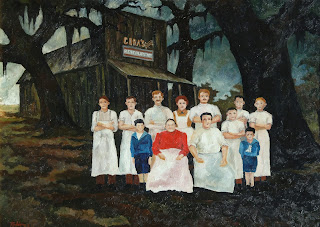 (pictured:  Cora’s Restaurant, 1975 by George Rodrigue, oil on canvas, 36x48 inches; click photo to enlarge-)
According to George, Domengeaux grew frustrated with the general lack of interest in this faded part of Louisiana’s history. In Cora’s Restaurant, beneath the enormous oaks, these timeless figures glow with Louisiana’s culture, reinforcing on canvas both Rodrigue’s and Domengeaux’s mission.
In addition, Domengeaux and Rodrigue held shows in Lafayette for French painters Valadier, Surrier and Brenot, presenting the artists with keys to the city and exposing the local community to these French masters. At one such exhibition in the late 1970s, French President Valery Giscard d'Estaing attended, with hopes of further strengthening the Louisiana-France bond. 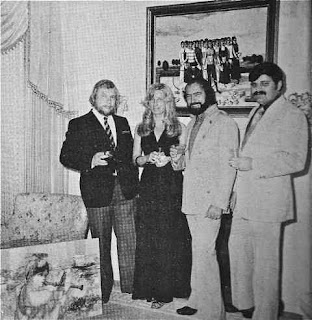 (pictured:  Artists Valadier, Madame Surrier, Surrier, and Rodrigue; a Valadier painting leans on the floor, and a Surrier hangs on the wall; The Lafayette Daily Advertiser, circa 1979-)
By the late 1970s, Domengeaux's fame extended to France, where people often thought that he was the President of Louisiana. According to George, Domengeaux enjoyed more clout than Governor Edwin Edwards. At one point, in fact, the CODOFIL president tussled with the State Department for cutting a deal on his own with a foreign government. As usual, however, Domengeaux charmed his way out of the mess and got what he wanted.
Whether or not one applauds his methods, Jimmy Domengeaux’s pride in Louisiana’s heritage drove his life’s mission and deserves admiration. His efforts produced a lasting and positive effect on our state. At a time when many dismissed Louisiana’s fading culture, particularly the French influences within small town, southwest Acadiana, he cherished it. Through CODOFIL, one man made a difference.

Wendy
*the pronunciation of “Domengeaux” is close to “DiMaggio,” as in the baseball player-
-a new Rodrigue book, The Other Side of the Painting, is “an illuminating, lively memoir recounting a husband and wife’s devotion to the arts;” learn more here-
-for more art and discussion, please join me on facebook-

Posted by Wendy Rodrigue Magnus at 10:51 AM