This morning George joined me in the bedroom after painting all night.  We stood at the window and watched the sunrise.
“There’s only one owl,” I whispered.
“Maybe they split up,” he replied.
But we both knew better.
-from The Other Side of the Painting 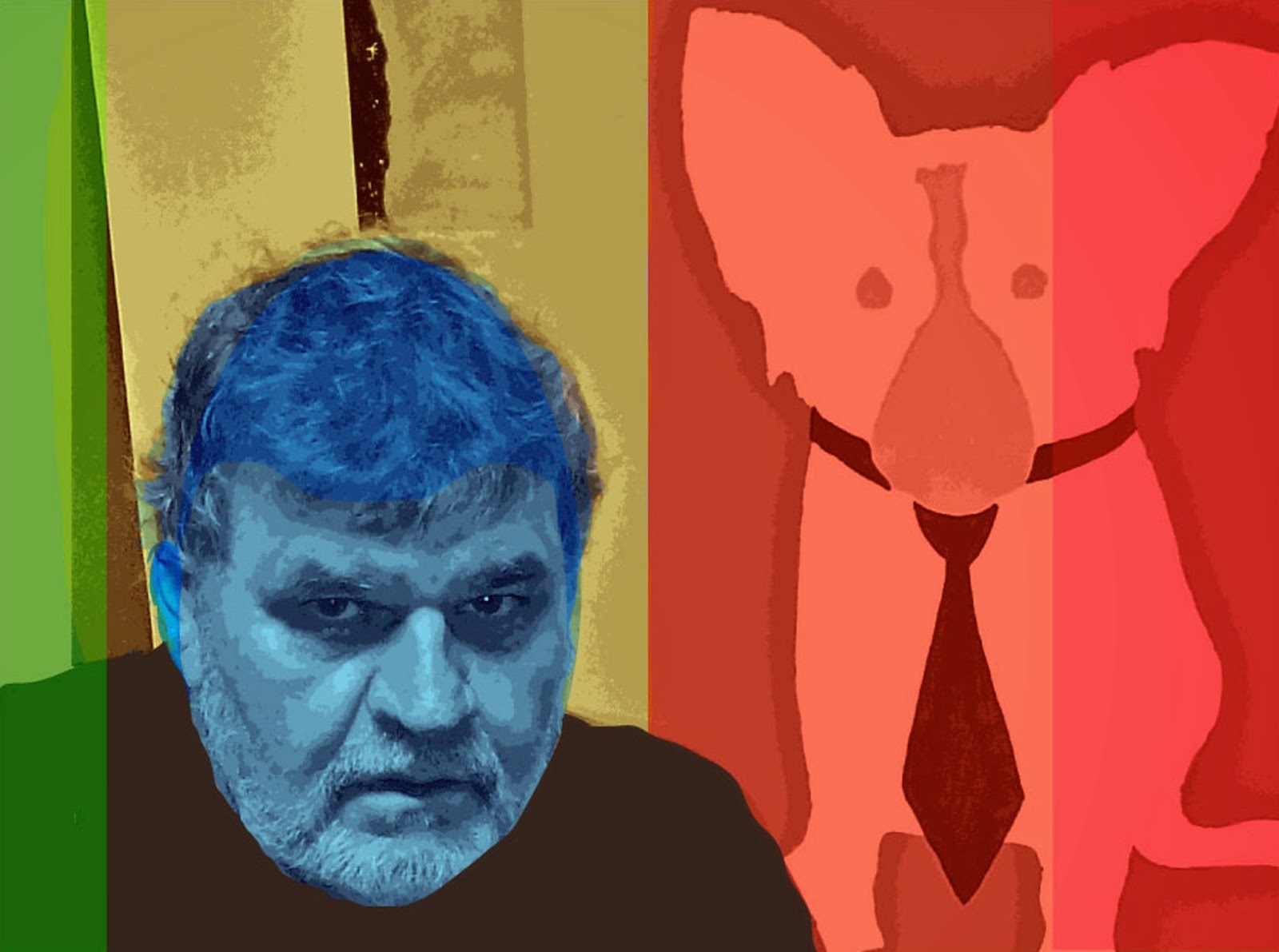 We wanted to see the bears.

In 2003, while in Alaska, George Rodrigue and I flew in a seaplane to a remote shore area near a trailhead.  Neither of us were hikers; we preferred walking in the woods. This particular day we followed the trail while clapping and singing (Jimmy Swaggart spirituals, as I recall) lest we surprise the locals, finally reaching a small cabin-type structure over a river.

Now quiet, we hunkered low in the lookout and waited.

Immediately, we were distracted---not by bears, but by fish---so many salmon that to pinpoint one, much less count the many, was impossible.  They swam furiously in a sea of themselves, an undulating phenomenon.  I whispered to George,

“I’ve never seen anything or anyone fight so hard for something.”

He nodded in silence and, amazed, we studied the situation, barely noticing the bears as they stuffed themselves at the buffet. 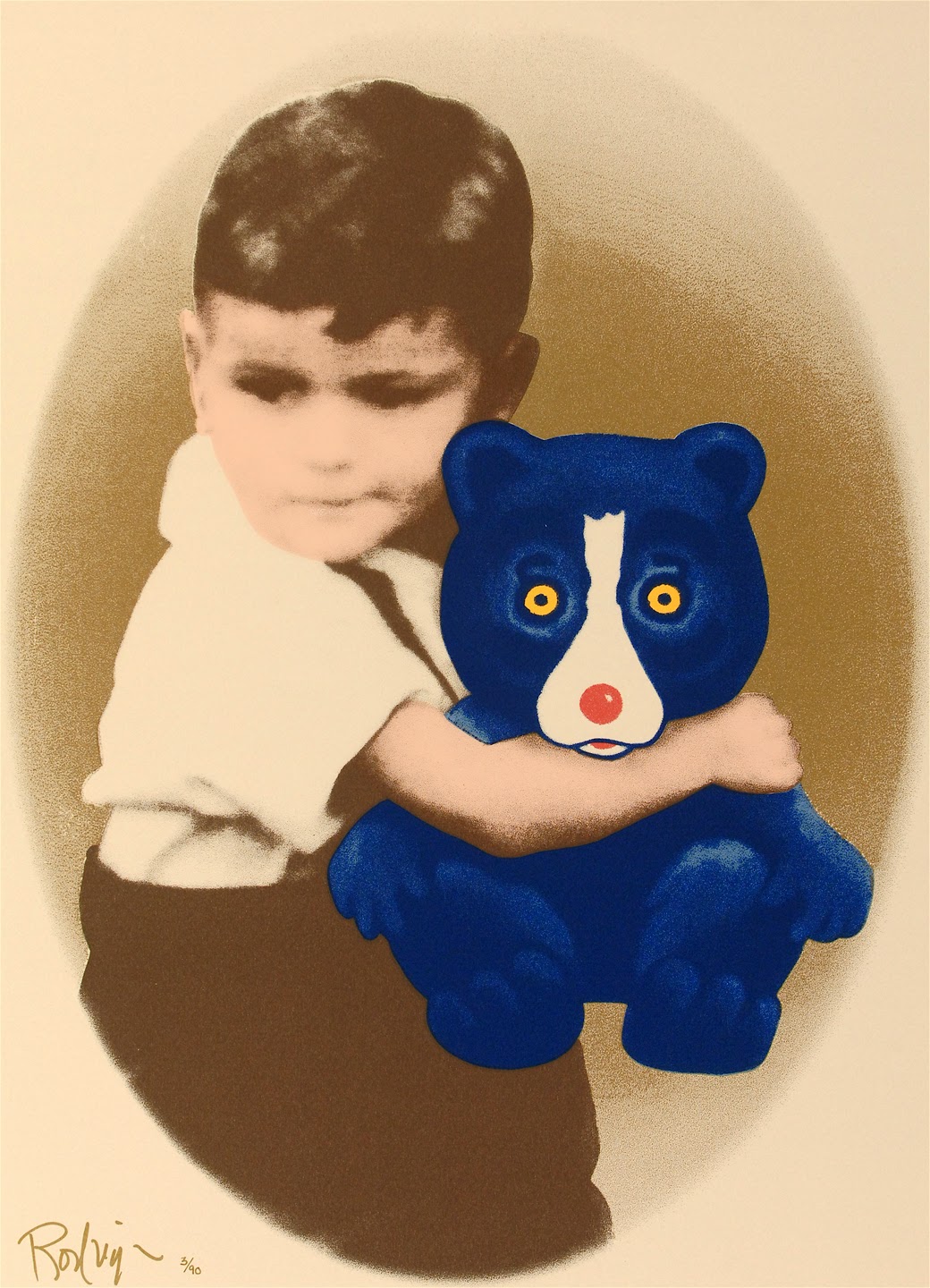 We learned later that the salmon, born in a small freshwater pond, swim with the current to the ocean, where they wander far and wide in the saltwater for several months or several years, depending on the variety, until an alarm sounds somewhere inside and says, That’s enough, Time to go, at which point they take a hard turn into that same freshwater stream, for an even harder fight, this time against the current, complete with boulders and raging water and bears, to reach the very place where they were born.

What’s the big deal with salmon fishing?...George and I wanted to know, realizing we could grab the fish with our hands.  Turns out, however, that by the time the fish begin this journey in earnest, they are already decomposing, a detail that makes no difference to a bear, but turns the stomach of us humans. 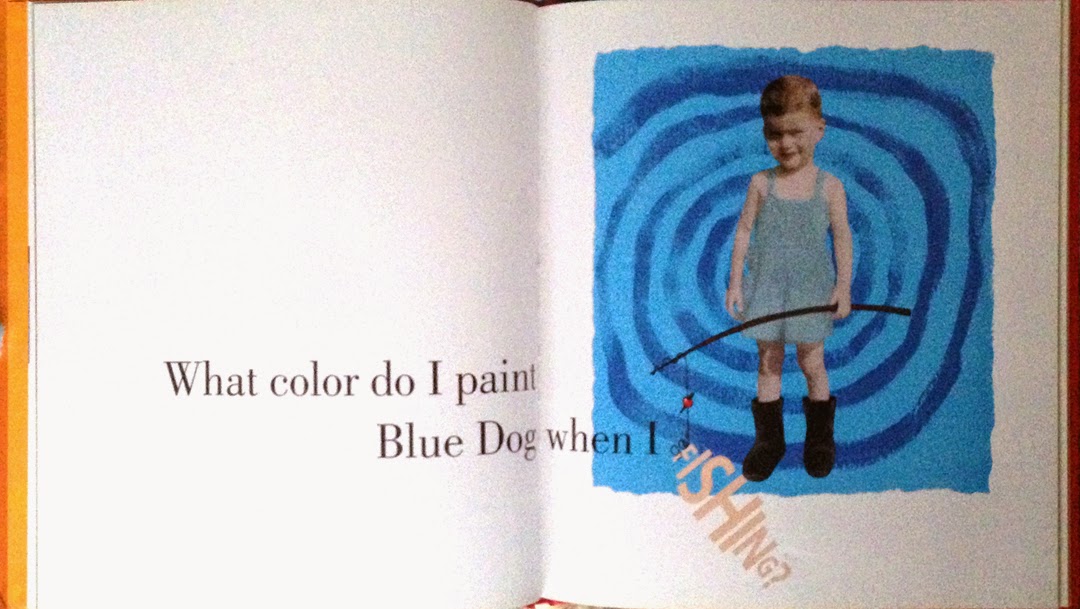 (from Why is Blue Dog Blue?; click photo to enlarge)

Of the millions of fish, approximately one percent reach the end or, depending on one’s perspective, the beginning.  Of those that do, the females, just prior to their deaths, lay their eggs in the shallow water.  The males, decaying all the while, use their last ounce of virility to fight over fertilization rights.  It’s no wonder, we mused, that a diet rich in salmon is recommended for increasing testosterone levels in humans.

At sunset, following a full day with the fish, we stood on the shore awaiting our return flight and, as a bonus, spotted the bald eagles.  In my memory, it seems that there were hundreds of them, a bird we seldom saw before, and only singularly, in the Big Sur Wilderness near Carmel.  Yet on this late summer’s day in Alaska, the most revered of America’s birds crowded the tops of the pines, no doubt attracted, like the bears, and like us, by the distracted and unsuspecting fish. 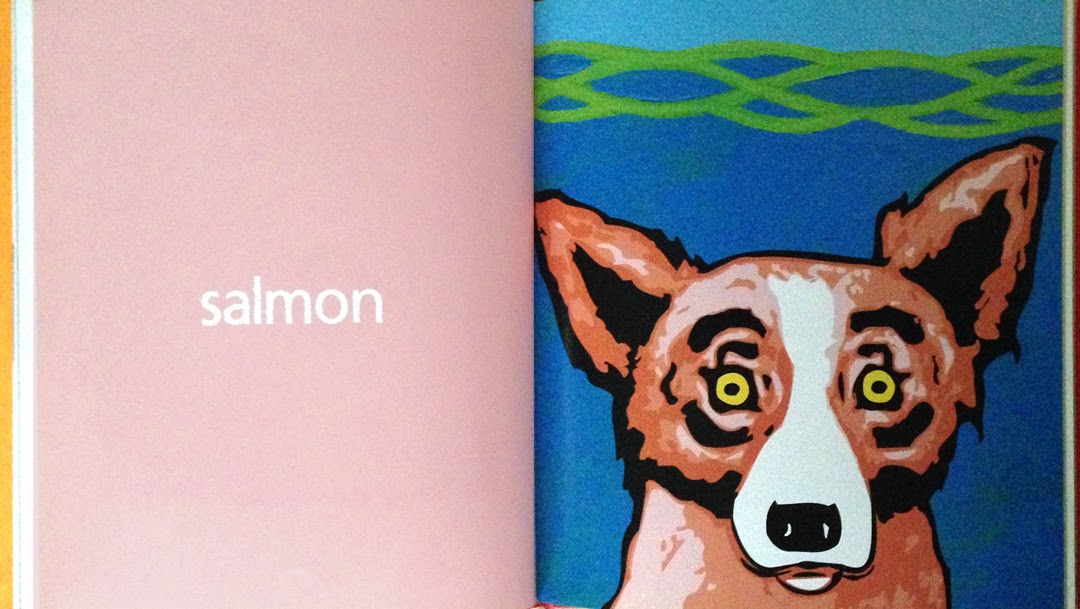 (from Why is Blue Dog Blue?; click photo to enlarge)

Since visiting Alaska twelve years ago, we often recalled the salmon, especially during the last few months of George’s life. Their story unfolds like a Shakespearean drama, a metaphor for existence, really.  It’s dust-to-dust, with the will to live and the desire to love falling somewhere in between.

Once, a few years ago, after several misdiagnoses regarding a skin discoloration on my torso, I became a class project (a lab rat) at a university hospital where the professor, standing over me, explained my rare condition.  As I reclined on the table while George and half a dozen interns looked on, the doctor stated, matter-of-factly,

“Your epidermis is decaying.”

In horrified unison and to the confusion of all, George and I exclaimed,

(The skin condition, by the way, is called morphea; my case is painless and relatively mild, and it provides the excellent service of keeping my vanity in check.) 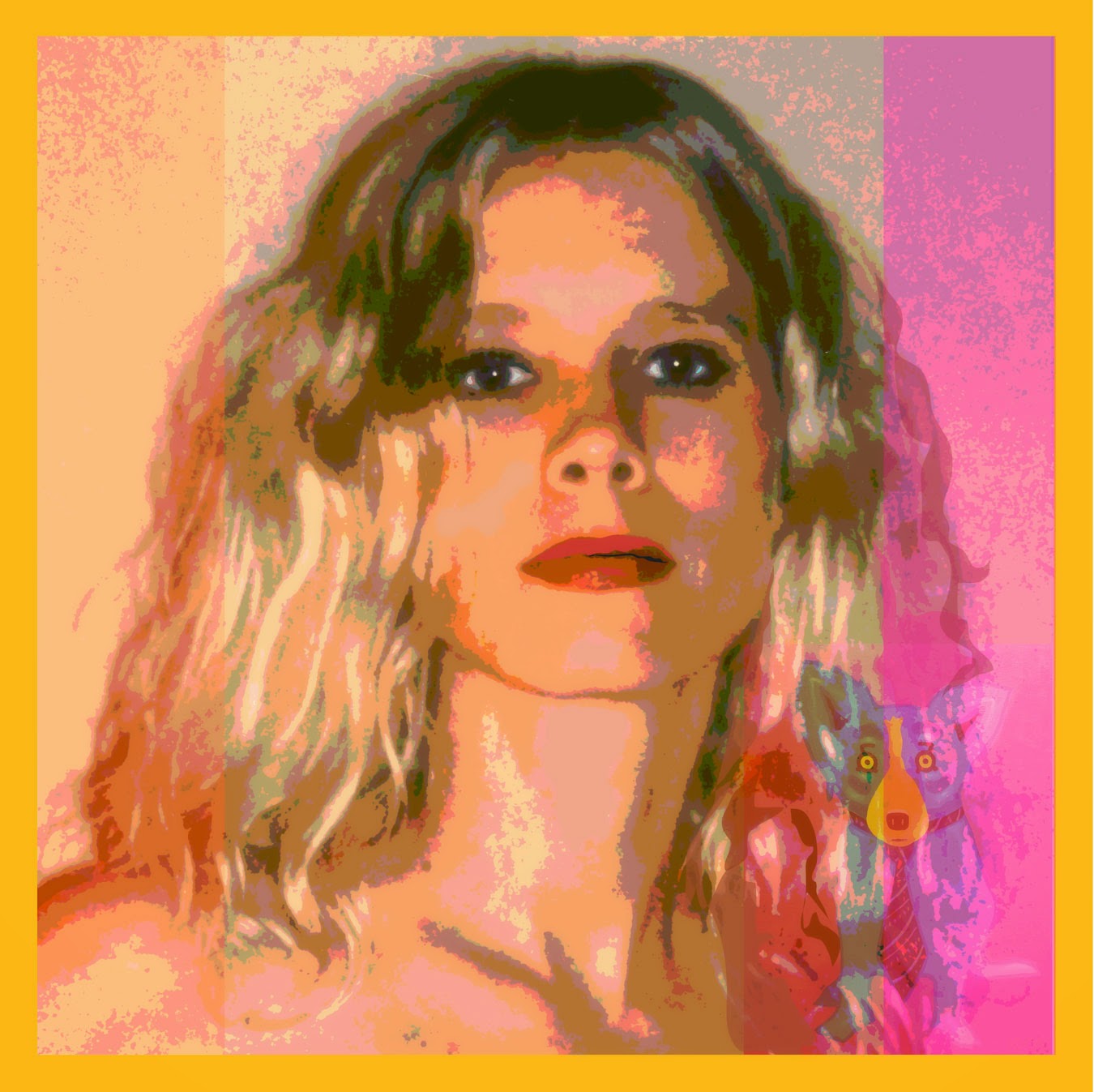 For all of his paintings of oak trees and one dog, George was not a naturalist or nature-painter.  Therefore I have no paintings of Alaska ---- or of salmon or bears (excepting stuffed bears) or eagles to share with you.  He did enjoy photographing nature. However, with a few exceptions, those images remain within his files, a place I can’t yet face.  So we’ll all have to wait and, as George would expect me to do anyway, revisit the salmon another time.

As I’ve shared often within lectures and essays, although George admired plein air painters, he was not one himself; nor did he paint nature from his photographs, even though he used photography as a tool, usually cutting and pasting elements from the photographs to create fabricated designs on his canvas.

He also used photography for inspiration.  In fact, in the late 1960s, before he painted Louisiana, he photographed it. After studying his slides he realized that no matter what or whom he photographed, “Every picture contained a tree.”

It was this realization that lead him to choose the Oak Tree as his shape and symbol, not based on a particular tree in nature, but rather on his tree, the one “in here,” he used to say, while clutching his chest. He developed a style of painting the tree, with hard edges and dissected by the canvas, so that the sky and light create interesting shapes beneath the branches, rather than overhead.

“If you stand here, Miss Wendy,” noted a wise child, as she took my hand during a school fieldtrip at the Besthoff Sculpture Garden, “the light shines from underneath the trees, just like in Mr. George’s paintings.” 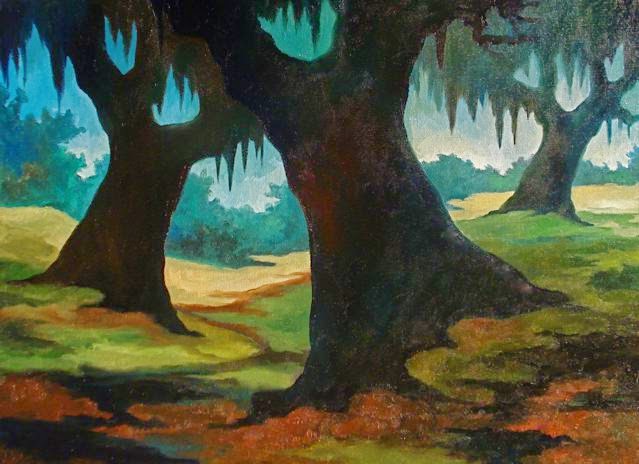 These days, when I awaken at night, I don’t find George, as I did before, at his easel.  But I do feel him in these ‘fish stories’ and, although I’m rarely in Louisiana anymore, in nature.  I sense him on the white sands and green waters of Okaloosa Island, in the long shadows cast by the short New Mexican pinons, and within the eyes of animals he never painted ---- such as Zoey, my sister Heather’s family dog. 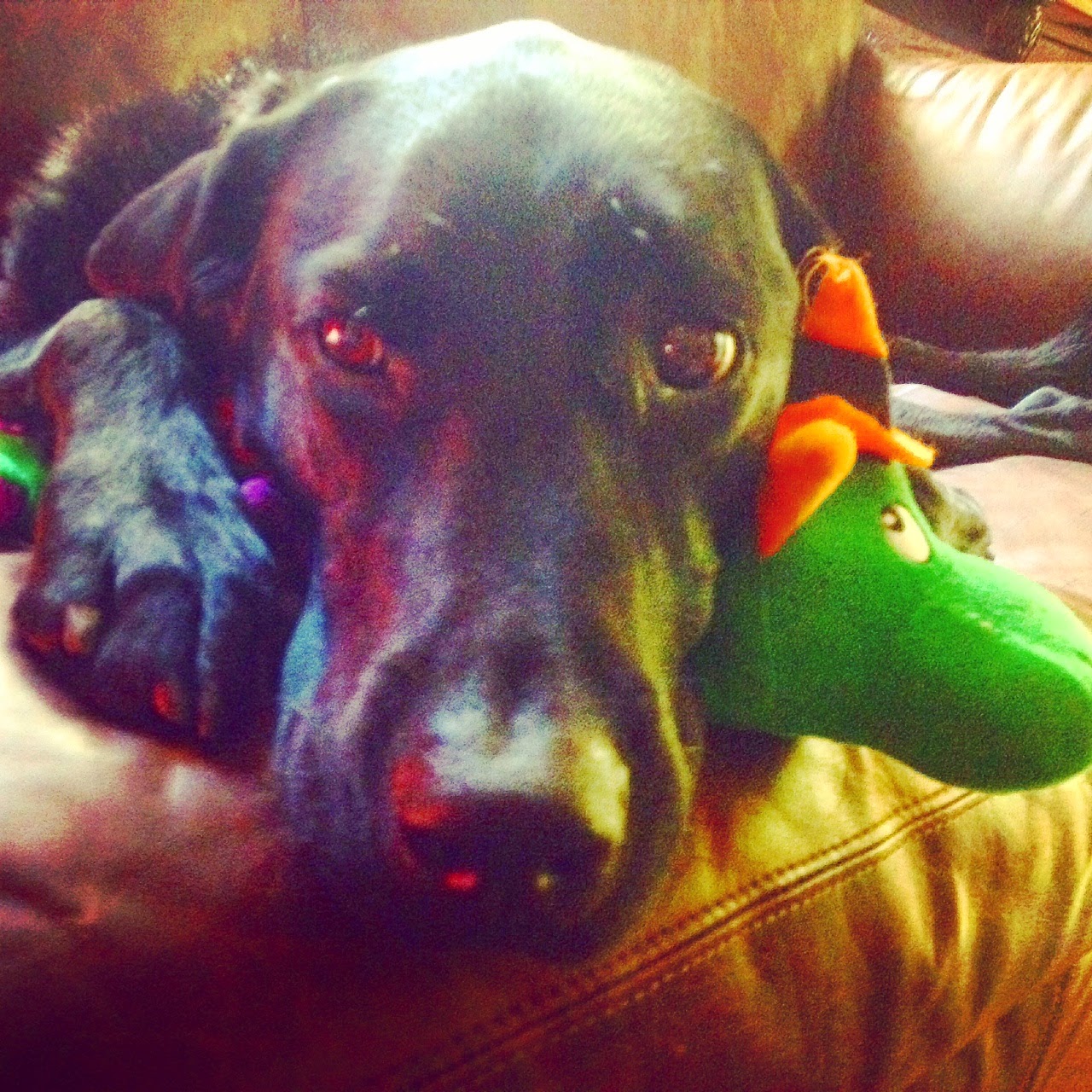 George and I felt linked to a pair of great horned owls that joined us for years to watch the sunrise from behind our home in Carmel Valley.  The giant nocturnal birds, however, always left in the morning mist, long before the light allowed a decent photograph.

On Thanksgiving Day 2014, in the golden afternoon sunshine of Galisteo, New Mexico, an unlikely visitor moved a small gathering to silence.  He remained a long time, maybe half an hour, watching these family and friends, among them myself, George’s son André, and, as a group, the artist-peers George most admired, the closest thing he knew to a Blaue Reiter or Vienna Secession, and the reason he visited Santa Fe every year since this artists' community first welcomed him with a solo exhibition in the mid-1980s.  One way or another, I heard from almost all of them over the following weeks, each one believing the owl to have been a mystical occurrence or visitor of some kind. 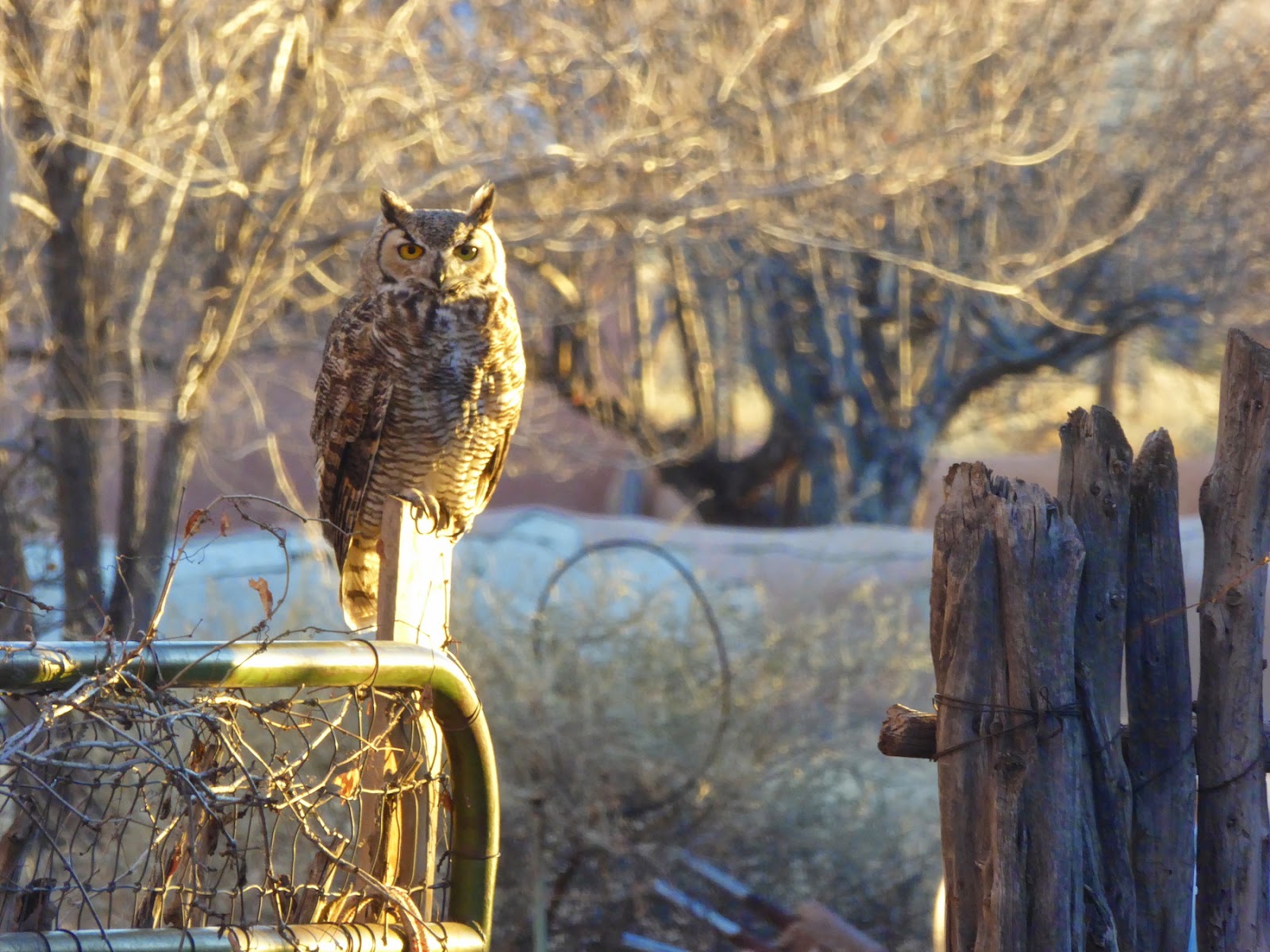 I don’t know if George has tried to contact me or not.  I don't even know if I believe in such things.  I feel sure, however, that the owl is more likely a sign than the salmon, which is found, in my new southwestern home, only at select restaurants.  What I do know is that I’m still swimming upstream, looking for him, despite the odds ….. everywhere.

*With this return to blogging, I realize, at last, that I’m the keeper of the memories, and that if I don’t write them down and get them out of my head, then the stories end.  I also have journals of notes and half-finished essays based on conversations with George.  No promises on how often I'll post, however, because, well, reliving us without him is ….

*The companion images of George and of me within this post are digital collages (2013, 20x20 inches, editions 50; click photos to enlarge), a combination of paintings and photographs arranged and colored by George in his computer, then printed on heavy rag paper. Wendy is his last artwork that includes me; and Rodrigue is his last self-portrait-

*Our owl visitor was photographed by George's friend, artist Douglas Magnus. Over a 25-year period, the two collaborated on numerous unique buckles and jewelry designs, such as this belt, which they made for me in 2012-

*In recent months, the Rodrigue family took on personally both George's Facebook page and the foundation’s, expanding the posts to feature not only his art, but also quotes, stories, and photographs.  Please join us on Facebook at The Art of George Rodrigue and The George Rodrigue Foundation of the Arts.  Also, find us on instagram-

Posted by Wendy Rodrigue Magnus at 7:02 AM

Email ThisBlogThis!Share to TwitterShare to FacebookShare to Pinterest
Links to this post
Labels: American West, Blue Dog, Landscapes, Other Animals, Other Artists, Photography, Santa Fe, The Other Side of the Painting
Newer Posts Older Posts Home
Subscribe to: Posts (Atom)