Circle of Life: Round Paintings

As I understand it, the bright-colored mandala represents the universe; its creation in sand and its inevitable destruction represent the impermanence of life.*

Some years ago I asked George Rodrigue if he would paint, for me, a meditative symbol.  He replied, naturally… 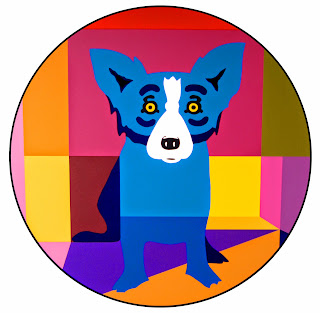 (pictured:  Circle of Life, 2002, an original silkscreen by George Rodrigue, signed and numbered edition of 25, 40x40 inches; click the photo to enlarge this striking image-)

The Blue Dog stares at us, looking for answers; and we stare back with the same universal questions, the ones that have challenged humankind from the beginning:  Who am I? Where am I going? …and... the question that most haunted us (and now me) in recent years, whispered aloud, yet to no one, late nights in the dark…

How did we get here? 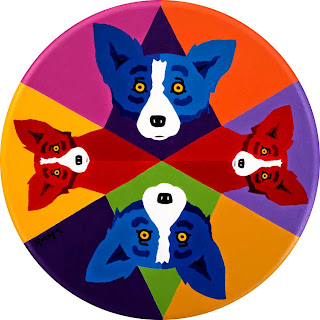 The same can be said of most iconic artistic interpretations throughout history ---whether a painting of a religious leader, such as the Buddha or Jesus, a mesmerizing human, such as da Vinci’s Mona Lisa or Rembrandt’s self-images, or even a landscape such as Monet’s Water Lilies or Van Gogh’s Starry Night.

If successful, the painting provides no answers.  Rather, it forces us to question and contemplate.  The imagery (or lack of, such as Rothko’s color fields or Pollock’s drips), as with life itself, transports us at once into both the here-and-now, as well as the anywhere-and-anytime. 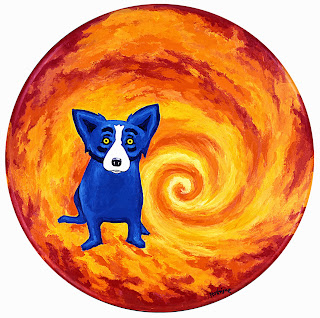 (pictured:  The Future is Now, 2002, acrylic on canvas by George Rodrigue, 46 inch diameter)

Ultimately, for me (and I daresay for George, who also spoke this way), if the mystery endures, then the painting holds up.   I guess the same can be said for life itself; because, as we all know, the only thing we can truly count on is change. 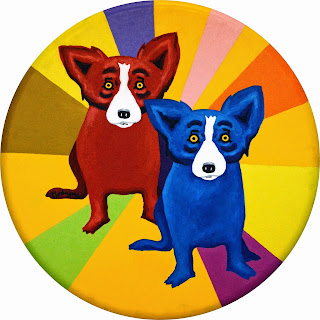 Outwardly, George spoke of these round paintings in terms of color, shape, and line.  He referred to the works as abstract:

“You can’t take a Blue Dog from one painting and switch it with one from another.  The color changes according to whatever other color is alongside it.” 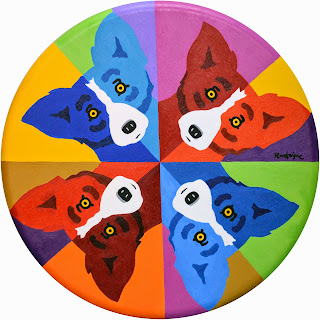 (pictured:  ‘Round the Mulberry Bush, 2002, acrylic on canvas by George Rodrigue, 36 inch diameter)

But behind the scenes, he spoke often of these round works as mandalas, or as metaphors for both the mystery and unity of life.

In the painting Consequences (below, 2002), George swirls his shapes and colors so that the abstract (the mystery) becomes more important than the dog. George was so obsessed with this near-cosmic swirling and symbol-of-the-whole that he challenged the composition further, making sure to incorporate, even if most viewers might not notice, his other inescapable iconic shape. His oak tree appears as an abstracted trunk-like presence in the upper left portion of the canvas. 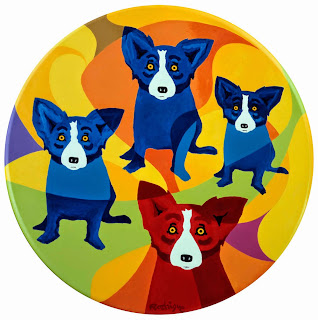 “My paintings are like puzzles,” George often said.  “Once the puzzle is complete, then the painting is finished.”

(pictured below:  Puzzle of Life, as I photographed the canvas on George’s easel in the early morning hours, just after he finished painting it, 2002; Carmel, California-) 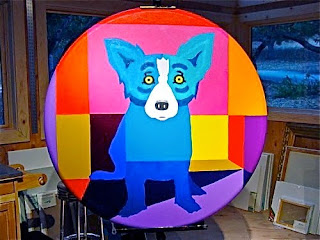 Perhaps the real chaos, the most dangerous discord, lies within our minds.*

...advised my meditation teacher many times in recent years.

And in my darkest hours, when I can barely lift my head for missing George, I remember those words and move to my mat. 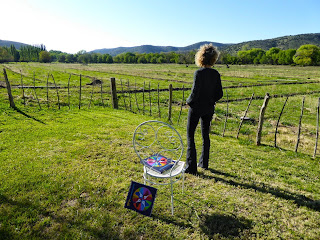 And afterwards, always, I feel better.

*read also “Tranquility from Chaos," an account of when George and I watched the Drepung Loseling monks create and destroy a mandala in Santa Fe, New Mexico; The Other Side of the Painting, UL Press, 2013, pp. 377-380; details here-

-pictured above and below:  contemplating Rodrigue and a new book on his art while visiting the historically artistic Wyeth-Hurd property in San Patricio, New Mexico; click photos to enlarge-

-several of the paintings featured in this post are on view through July 19th at RODRIGUE:  HOUSTON, an exhibition of 75 original works by George Rodrigue spanning 45 years; details here- 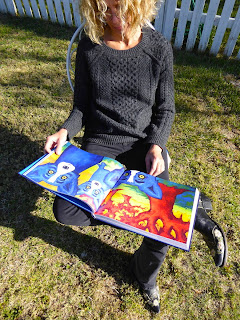 -a beautiful new book (above), Rodrigue:  The Sanders Collection, features the painting ‘Round the Mulberry Bush as a striking embossed image on the cover (just the kind of special treatment George would have designed); learn more here-

Posted by Wendy Rodrigue Magnus at 9:26 AM

Email ThisBlogThis!Share to TwitterShare to FacebookShare to Pinterest
Links to this post
Labels: Blue Dog, Books, Other Artists, The Other Side of the Painting
Newer Posts Older Posts Home
Subscribe to: Posts (Atom)