“I never thought before that I was interesting, but after talking with you, I realize that I’m fascinating!” –Roz Cole

In September 2013 I spent several weeks in a New York City hospital room with George Rodrigue’s longtime literary agent, Rosalind Cole.  Weak from his medication’s side effects, George couldn’t travel, and I remember well standing at sunrise on the curb of the tiny airport in Monterey, California, crying as he drove away.

I didn’t want to leave him.

George’s son André arrived later that day and remained throughout my absence.  Roz, on the other hand, was alone.  Intensely private and without any family, she trusted only us with her secret, telling no one in New York of her illness, a cancer that would take her life some six months later.  George and I both loved her; and although few others understood our actions, we knew that I had to go. 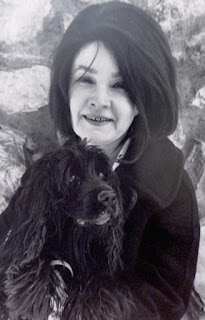 As often happened with Roz, things were complicated.  She rejected modern treatments and medical teams, demanding instead the impossible:  “a cure” and “an old-fashioned doctor.”

The best I could do was listen and try, albeit with little success, to ease her distress in some way.  Usually this included distractions, whether a phone-call from "Georgie," a lengthy game of 22, or a walk down memory lane. 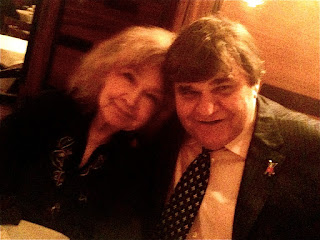 Because she insisted on privacy, Roz panicked if she caught me taking notes.  Yet the narrator in me revered her nostalgia.  I kept my notebook open on my knees beneath her hospital tray and scribbled without seeing the pages.  It’s a betrayal for which I have no regrets. 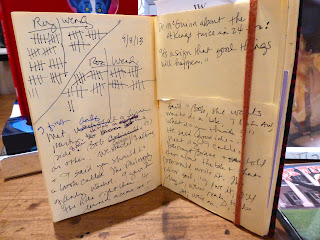 I’ll trickle out the stories and notes one way or another over time.  But today I share with you below, exactly as Roz shared with me, a snippet recalling perhaps her most famous client and their legendary art world publication.

(pictured:  a ‘selfie’ by George Rodrigue, with a photograph of Andy Warhol with his camera by Annie Leibovitz, New Orleans, 2011; click photo to enlarge-) 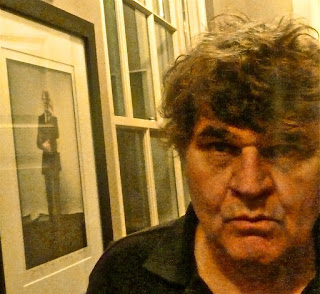 I first met Andy at a dinner party. He was on one side of me, with Bob Colacello on the other.  We started talking and I said, “You should do a book called The Philosophy of Andy Warhol.”  I gave him the title right there.

He leaned across me and said, “Bob, she wants me to do a book, The Philosophy of Andy Warhol.  What do you think?”

The next day I called Harcourt Brace and told them about the book and that Bob would write it.  The editor said, “I love it, I’ll buy it, we’re ready to do it, we’re on.”

I wasn’t just talk, he said.  I made things happen. 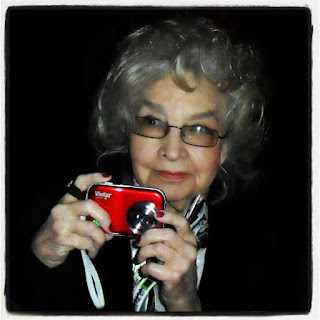 That was the beginning; and we did a lot of books together.

He gave a birthday party for me at Pearl’s (Chinese restaurant on 48th).  He gave me a beautiful shawl from Halston.  Andy and I got along really well.

Patrick O’Higgins* was also Andy’s friend, and he had fifteen cat drawings (from Sam).  And when Patrick died, he left them to me.  But they weren’t signed.  I told Andy and he told me to bring them to The Factory, and so I did.

Andy removed them from the frames and signed them.

No! They’ve been stacked on the floor in my apartment ever since.  On the wall I have a Blue Dog in a King’s robe.  It’s above my bed.  I love it. 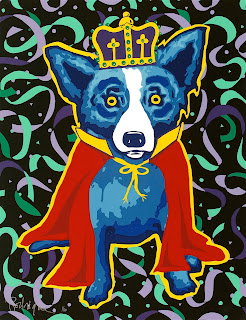 How the hell are we going to get out of here, Wendy?

*Patrick O'Higgins, author of the hugely entertaining Madame:  An Intimate Biography of Helena Rubenstein (1971, The Viking Press) was also one of Roz's authors-

-George and I produced ten books with Roz Cole between 1994 and 2012, working with publishers including Viking Penguin, Harry N. Abrams, Stewart, Tabori & Chang, Sterling, and Rizzoli; see the collection here- 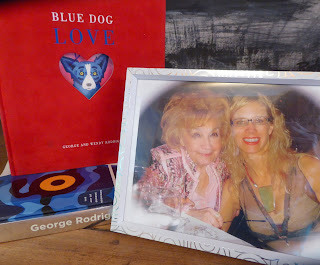 Posted by Wendy Rodrigue Magnus at 8:42 AM