In his last weeks, while George slept, I watched for hours as he painted in the air….

***
Several months ago I posted a painting to George’s facebook page along with the words, “For Rodrigue, the Blue Dog, as it exists on his canvas, never referenced a real dog.”  The backlash was immediate, as people defended Tiffany, whose photograph inspired the dog’s shape.

Yet what I was trying to share is what I have in my head, as explained to me by George, about how he genuinely feels when he picks up his brush.  Yes, some of the books and painting titles focus on the loup-garou and Tiffany; and it is true that those elements are genuine origins of the Blue Dog Series.  However, while at his easel George was not thinking about his dog or, similarly, within his landscapes, an oak tree.  Rather, he was thinking about the elements, process, and tactility of painting. 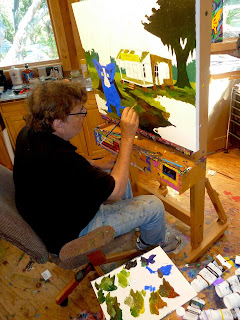 He repeated countless times, as he moved his brush with that specific and personal Rodrigue stroke,

“I love the act of applying paint to the canvas.”

No matter what he shared with others through books and speech, it was clear to me that George wanted me to understand that what he really loved, above all else, was painting.  Indeed, it was okay for others to focus on a Cajun myth or on Tiffany or on any number of interpretations:

“What others see in the painting is correct also,” George would say, “because it’s correct for them.”* 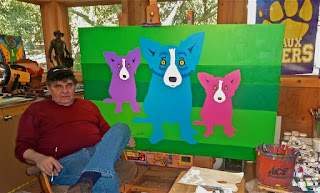 And, most poignant today, he often remarked about his own work and that of others:

“Great paintings take on a life of their own, beyond the artist’s intention --- and especially after the artist is gone.”

That’s why the Blue Dog remains mysterious, and that’s also why he painted it countless times without becoming bored.  George remained interested not because the works are an obsession with his long-deceased pet.  Rather, his art reflects his obsession with using paint to create something interesting to his eye, as well as something so mysterious that it defies, ultimately, any sort of universal or static interpretation. 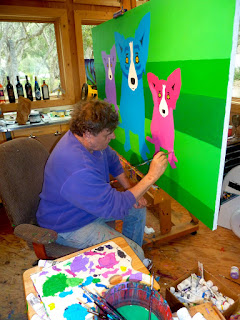 It was George’s nature to joke with others --- not only because he enjoyed seeing people laugh, and laughing with them, but also because he felt confident that his work holds its own.  Outside of our relationship, he found the process of explaining his work exhausting, because most people, he felt, would not understand the intimate nature of his artistic expression.

Instead, he joked publicly for years...

“I fed Tiffany Gravy Train every day; and now she’s feeding me!”

At his easel, however, he wasn’t laughing.   His focus on shape, design, and color was intense, as was his dedication to establishing a connection between the eyes of the dog-shape and the eyes of the viewer.  He used these elements to convey a meaning beyond the obvious, so that the puzzle never solves itself.  Whether Landscapes, Cajuns, Hurricanes, Bodies, or Blue Dogs, despite books, lectures, and blog posts, the ambiguity…or mystery… remains. 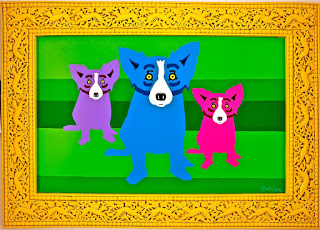 So here I sit, muddled, knowing and sharing some of what George intended, while knowing that even he believed that his intentions, in the long run, don’t really matter.

-for related posts, see “Lucky Dog” and "The Lone Artist"-

-pictured throughout this post:  Greenfields (2013, 42x66 inches). George intended this late painting, now on view in his Carmel, California gallery, to be a strong abstraction of his landscapes and Cajun genre works, and the closest he’d come so far to perfecting his abstracted style.  In addition, he juxtaposed the canvas’s strength of simplicity and modernism with the East Indian frame’s complexity and historical/cultural narrative. Years earlier (most famously, with his Aioli Dinner of 1971), he coined the phrase and applied the technique of “painting to the frame." Story here-

Posted by Wendy Rodrigue Magnus at 9:03 AM