Following twenty years in a private collection, this week two special paintings by George Rodrigue hang for the first time ever in New Orleans.  See Lacoste Lineup (1991) and Spooked by Bourré (1993) on view for a limited time at Rodrigue Studio in the French Quarter.  The story behind these paintings is one of the most fascinating in George's painting development-

In the summer of 1991, George rented a commercial space in Carmel-by-the-Sea, California.  Downtown rental property was at a premium and rarely available, and he required City Council approval to convert the former dentist’s office into an art gallery.

The narrow, deep space seemed at first awkward for Galerie Blue Dog, and it relied primarily on artificial light.  Its only window stretched 82 inches across, facing 6th Avenue, one block behind the main drag of Ocean Avenue.  Attracting attention would be difficult --- especially that of art enthusiasts who might merely glimpse George's gallery from the corner as they walked to the well-known street.

I remember the scene well.  George stretched two canvases the exact width of the window, allowing space for a small display underneath. Facing inside, he painted a moonscape, with two dogs staring across the long gallery from above.  Facing outside, he painted Lacoste Lineup, his first artwork created in California since his student projects at the Art Center College of Design in 1960s Los Angeles.

With its five Blue Dogs, Oak Trees, Swirling Suns, and Alligator, the painting announced a Cajun’s return to the West Coast, and the fulfillment of a dream he sought since Art School.

(pictured:  George Rodrigue works on Lacoste Lineup on a patio in Carmel, California while his son Jacques and friend Shawn look on, 1991; click photos to enlarge-) 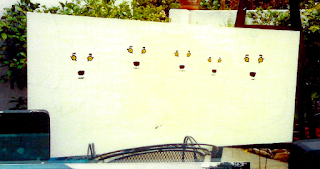 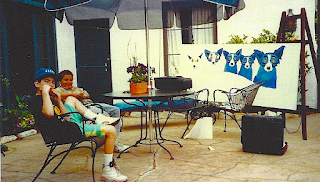 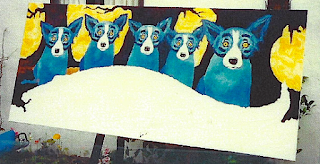 Today Rodrigue Studio Carmel occupies a brightly lit location on busy Dolores Street near the corner of Ocean Avenue.  Rodrigue continued to paint for the gallery and its windows, but he enjoyed more flexibility in the larger space.  By 2000 we owned a home in nearby Carmel Valley and George painted most of his artwork, whether for Carmel or New Orleans, in his studio there, preferring the quiet inspiration of the Santa Lucia Mountains to the hectic pace of his otherwise public life.

In 1986 seventeen hatchlings became the first white alligators ever recorded, when they were found by chance in the Louisiana swamps.  The Louisiana Land and Exploration Company discovered the 9-inch babies in their nest, rescuing them before predators took notice of the glowing animals.

Now full-grown and on view at several habitats across the United States, including the Audubon Zoo in New Orleans, the alligators are not albinos, but rather have a rare genetic condition called leucism.  Their piercing blue eyes contribute to their exotic appearance and mystique. 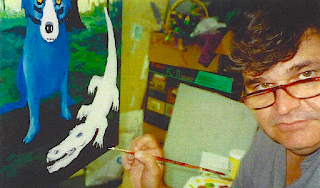 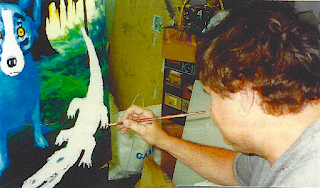 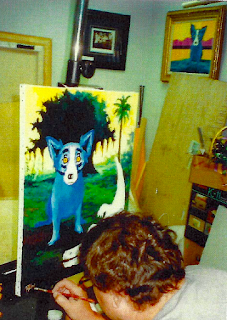 See Spooked by Bourré (1993, 24x20 inches) and Lacoste Lineup, two unique paintings within a private collection for twenty-plus years, and now on view for a limited time at Rodrigue Studio and for the first time ever in New Orleans- 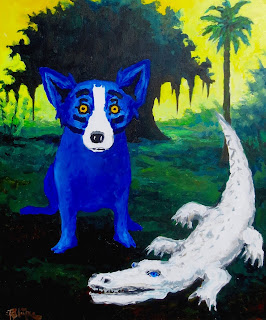 -sadly, Spots, one of the original hatchlings who lived at the Audubon Aquarium since 1990, and a brother to Bourré, passed away at the age of 28 in September 2015-

-please join me on Instagram at wendy.rodrigue ....I think I get it now- 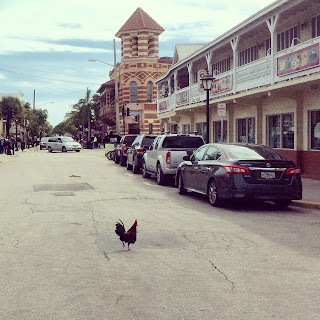