George Rodrigue’s Blue Dog Hog premiered in 1994 in a New York City gallery called The Time is Always Now.  This unique three-dimensional artwork dazzled at the center of the warehouse-type space, with George’s paintings, some as large as fifteen feet across, surrounding the bike. 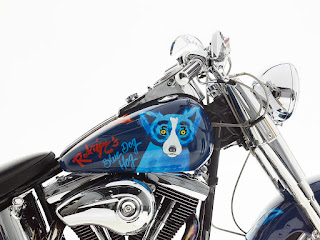 The exhibition coincided with the release of the book Blue Dog (1994, Viking Penguin), George’s first U.S. publication on the Blue Dog Series, and his first major book since The Cajuns of George Rodrigue (1976, Oxmoor House).

Excited about the book, the space, and the big city, George painted and created specifically for the show.  Every piece was large-scale to take advantage of the colossal interior.  The Blue Dog Hog, intended by George as the exhibition’s showstopper, sat on a riser in the center of the room. 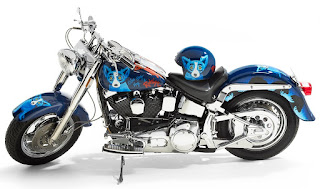 I remember George lifting his petite publishing agent, Roz Cole, onto the riser during the star-studded and slammed opening night party, accessed by tracking blue paw prints for blocks throughout SOHO.

At age sixty-six, Roz, a lifelong New Yorker and former MGM recording star, donned the hand-painted helmet over her bouffant-style wig, threw her bare legs and black stilettos over the seat of the Harley, and posed for half the night with a glass of red wine in one hand while waving her other hand in the air, as though she rode a mechanical bull.

(I also recall her light blue VW bug parked out front, and how we all marveled that she actually drove to the exhibition and found a parking space).

“This is terrific!” shouted Roz from atop the bike.  Not one of the hundreds of folks in attendance, including actor Matt Dillon and artist/photographer Peter Beard, left the party without taking her picture. 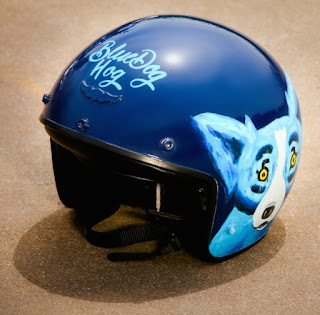 Following the NYC exhibition, the bike returned, in 1995, to Louisiana.  …..but not to Butte la Rose, where George had painted it in the swamp at his camp on the Atchafalaya River, but rather to the New Orleans French Quarter, where it caused no end of frustration for our sales staff.  Every passerby fancied a photo-op on the Blue Dog Hog, similar to the Chicago cows of the late 1990s and the Rodrigue Steinway of 2012.

To this day, few people realize the vastness of George’s interests within his art.  The spectacular bike surprised the public.  Too often he’s dismissed as “the guy who paints the Blue Dog,” as though he lacks variety within his work.  The truth is, however, that his career cannot be divided neatly into 25 years of Cajuns and 25 years of Blue Dogs.  Rather, it’s 50 years of creative development ---on his canvas, in his personal interests, and within his community.  Just as he remained loyal to his childhood friends and his home state, he also remained true to his subjects.  He didn’t abandon one style for another; instead he kept adding.

This is the heart of the revolving exhibitions (since February 2014) currently within George’s galleries, focusing on themes such as Graveyards, Music, Sports, Politics, and Mardi Gras.  In each case, the paintings, borrowed from private collections, span decades, pulled from both the Cajun and Blue Dog Series, and yet tied together by George’s lifelong interests. 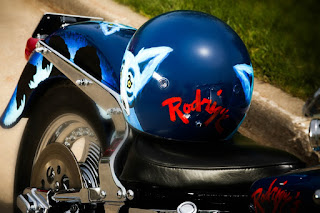 Similarly, the Blue Dog Hog incorporates all three Rodrigue identifiers.  The Oak Trees, prominent within his paintings and sculptures since the late 1960s, stretch like Oak Alley's promenade along the back fender.  The Blue and Red Dogs, prevalent since the early 1990s, echo each other throughout the composition.  The equally distinctive rolling red “Rodrigue" signatures are a strong design element within George’s Cajun posters of the 1970s and 80s, as well as within many of his Blue Dog silkscreens.

“I was never the best draftsman in art school,” George often recalled.  “But I always had the best ideas.”

Transforming these ideas into tangible works of art proved challenging.  In the case of the Hog, for example, George dissembled the bike before painting it, piecing his design together like a puzzle before rebuilding the motorcycle.

The red dog and signatures clearly relate to the bike’s rear brake light, reinforcing George’s focus on design and concept. 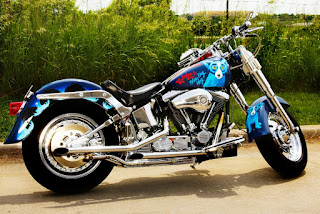 Just as important is the emphasis on the bike’s chrome details, an obsession for George since the 1950s, and an element increasingly important within his work, especially within late series such as Swamp Dogs, Hollywood Stars, and a brilliant collection of mixed medias on shiny metal.

….proving once again that George enjoyed the challenge of growing creatively within the repetition of his favorite ideas. 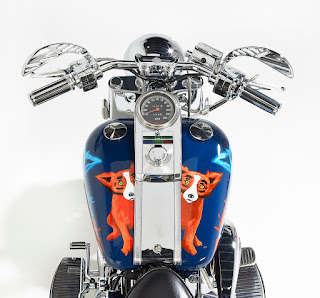 “I know there’s going to be a Blue Dog in it,” he often said, referencing a blank canvas (or in this case, a motorcycle), “but beyond that, I haven't figured it out."

"And that’s where the challenge lies.  That’s what keeps it fun for me.”

-More on Rodrigue and motorcycles here-

-Please join me, along with George’s sons André and Jacques, for the opening reception of “Rodrigue:  Spirit of the Game,” a new exhibition at Rodrigue Studio New Orleans spanning forty years of paintings, ranging in theme from boxing to bourré.  Thursday, May 19, 2016 from 6-8 p.m.  Details here-