I returned recently, for the first time in five years, to Shidoni, a place where George worked regularly over three decades.

Located in the lush Tesuque Valley, an oasis in the desert near Santa Fe, New Mexico, the foundry was George’s choice for some thirty years for transforming his clay sculptures into bronzes ---whether three-dimensional interpretations based on Longfellow’s poem, A Tale of Acadie, two-dimensional wall mountings of Blue Dogs in various patinas, or a late uncompleted project of a fuller, smoother, abstracted dog, meant for chrome, two sides, a pole, and a stand. 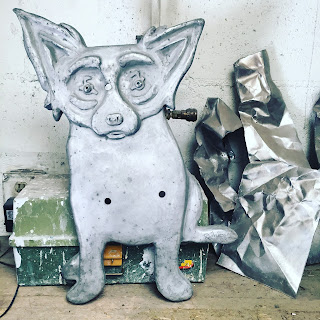 As I write this, a raven calls “Shidoni” from the apple tree above me.

I approached Shidoni with an original Rodrigue piece that spans, within one work, those same thirty years.  It begins with a clay relief modeled by George circa 1980 onto the backside of his mother’s china plate.  Originally intended as a bronze relief, George abandoned the project until I discovered it somewhere---I don’t remember where---early in our marriage.  I proclaimed it “a favorite,” running my young fingertips over his young fingerprints, clearly visible in the greenish clay.

He gave me the plate, and I placed it on a table-top easel within our living room, where it remained, a cherished and personal expression, for sixteen years. 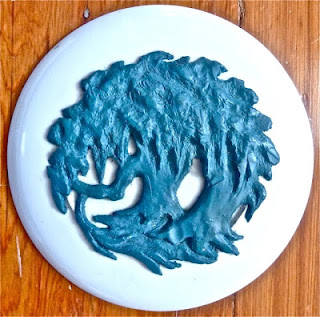 After losing him, I consulted George’s longtime artist-friend, Douglas Magnus of Santa Fe, for help in reproducing this clay oak tree design as jewelry for a family gift.

“George sent me this!” he exclaimed.

And indeed, even while he was ill, George had sent Doug photographs of the piece, intending jewelry as a surprise for me. 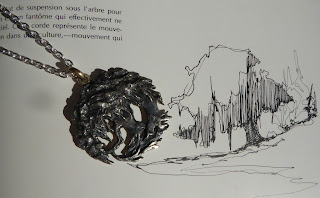 Pictured:  Pendant, prototype photographed on a page of The Cajuns of George Rodrigue (1976, Oxmoor House); click photo to enlarge- 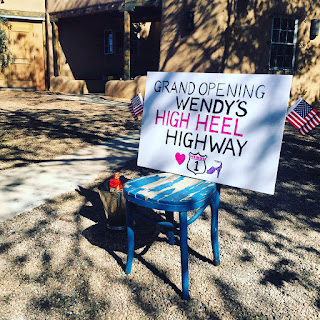 …One time a raven greeted me alongside my car, George’s car, when it landed on the edge of a near-by parked pick-up as I sat, windows down, at a traffic light.  The giant bird and I stared at each other, maybe three feet between us, and the cars backed up behind me without my realizing it, and without anyone honking.  Like me, they were amazed by the fearless glossy bird and perhaps they too saw him as a sign in “The Land of Enchantment” and “The City Different.” 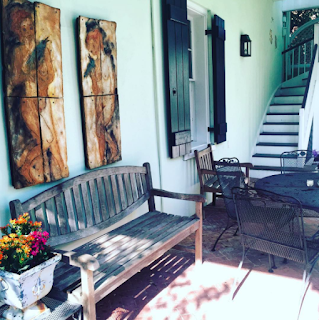 Pictured:  Clay murals with ravens by Priscilla Hoback, as they look today on the wall of our home in New Orleans; purchased by George as a gift for me in Galisteo, New Mexico in 1998; click photo to enlarge-

It’s strange ----emotional….right…and oh-so-wrong---- that I should explore and in some cases complete George’s projects without him.  No one understands better than me that I am not the artist.  And yet I find myself caught between, well, forgive the pun, letting sleeping dogs lie, versus tackling unfinished projects defined in my head by George’s animated soliloquies, as he outlined his plans on cocktail napkins over quiet dinners, or on our frequent cross-country drives, when we eventually abandoned music in favor of such sharing or, more often, the silent road. 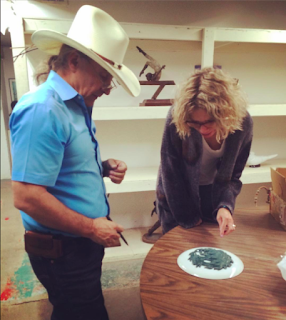 Pictured:  with Scott Hicks at Shidoni Foundry; May 2016

Last week I brought George’s plate to Shidoni Foundry, where it now is destined for several versions:  the bronze he intended in 1980; the chrome he loved in 2013; and the giant scale he embraced in his sculptures of the 2000s.  (I don’t know what George ultimately would have completed, so I’m following through with all of them.)

Since moving to New Mexico, I’ve learned that I’m Bilagáana.  I’ve become familiar with the Navajo people, the Diné, through my friend and great-niece Katrina, who traded “the rez” for love and Hollywood.  Her beautiful spirit remains with her, however, as she and her bright smile hold steadfastly natural and optimistic within an oftentimes false and cynical outside world. 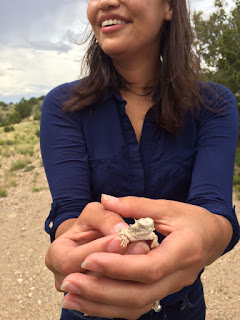 I never heard Katrina say the word “Shidoni,” a Navajo friendly greeting, according to the internet.  Rather, she greets me, without fail, with her beautiful smile and a warm hug.  I’ll need to double-check with her, I guess, that the google translation of her language is accurate, as I would not want to offend these ancient and spiritual people with my presumptions.  But then again, what harm ever came from a genuine “friendly greeting.” 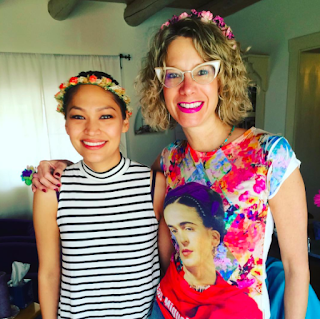 -for a related post and photographs, see “George Rodrigue:  The Bronzes”-

-pictured above:  with Katrina Kavanaugh on Easter Sunday, 2016-

-please join me this weekend, June 3rd and 4th 2016, at the Longview Museum of Fine Arts for a series of events honoring George Rodrigue.  Free and open to the public.  Learn more-

Posted by Wendy Rodrigue Magnus at 7:40 AM