Since losing George in 2013, we (myself, his sons, and our staff), have made educating the public about his life and work a priority. In the galleries, we've focused on exhibitions that span his 45-year career, including the current installations, Rodrigue:  Blue Dog for President in New Orleans and  Rodrigue in Carmel:  Galerie Blue Dog Celebrates 25 Years in Carmel, California.

These unique exhibitions borrow original works from Rodrigue's archives, as well as from private collectors.  Rodrigue Studio's Curator of Exhibitions, Dana Holland-Beickert of Memphis, Tennessee, expertly chooses and installs the artwork based on her extensive museum background, including her work on the George Rodrigue Retrospectives at the Dixon Gallery and Gardens in Memphis (2007) and the New Orleans Museum of Art (2008).

Both shows broke records at those museums for exhibitions by a contemporary or living artist, in large part due to Holland-Beickert's curatorial skills, including her impressive and thorough research on Rodrigue and her proficient analysis of his art.

Dana and I have worked together on numerous Rodrigue projects over the past decade, within museums and Rodrigue Studios.  This includes our collaboration on wall texts, extended labels, and other related materials.  Lately, this has been so extensive as to take my time from my usual blog essays.  So, lest I leave you hanging any longer, please enjoy below an excerpt from our newest exhibition, opening this week in Lafayette, featuring twenty-five exceptional and rarely-seen paintings by George Rodrigue.

Throughout, I've sprinkled painting selections from the exhibition and linked to related essays (as indicated by any highlighted words or phrases).

George Rodrigue (1944-2013) was born and raised in New Iberia, Louisiana, and lived in Lafayette for thirty-five years. His family descended from the original Cajun settlers after four Rodrigue brothers walked from Nova Scotia to southwest Louisiana during Le Grand Dérangement of 1755.

Following his art studies at the University of Southwestern Louisiana (now the University of Louisiana at Lafayette), Rodrigue attended the Art Center College of Design in Los Angeles, where he recognized from afar the unique and fading Cajun culture. Upon his return to Acadiana in 1967, he committed himself to preserving his beloved heritage, landscape, and mythology on his canvas.

Although his mother insisted on describing their family as “pure French,” Rodrigue embraced proudly, from the beginning, the description “Cajun Artist.” 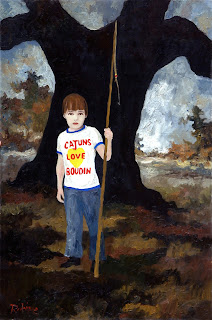 Now residing in Lafayette, Rodrigue was determined to make a living as an artist. However, he never imagined that selling his art would be his responsibility. At that time there were no galleries in Lafayette, and with the exception of the Reilly Gallery in New Orleans, there was not a gallery anywhere that would display his old-world, Renaissance-style Louisiana landscapes — repetitive interpretations of dark oaks and small skies.

After months of seeking representation, Rodrigue accepted that he was on his own. He placed a small advertisement announcing “Bayou Country Paintings” in the back of Southern Living Magazine and Acadiana Profile, using his Lafayette home phone number and address--- located on Duclos Street. 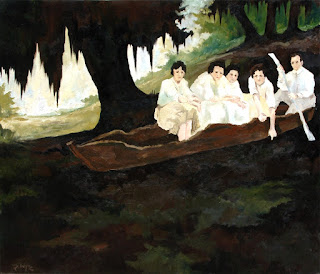 Rodrigue’s paintings and efforts attracted the attention of his childhood friend Dickie Hebert, also from New Iberia. Dickie and George reconnected in 1970 when Dickie moved back to Lafayette from Texas to work as a pharmacist. By this time, Rodrigue had opened a small gallery on Pinhook Road, where he painted daily and felt fortunate to receive one or two visitors per week.

Early on, Dickie Hebert purchased a small landscape for $150.00. Excited about his acquisition, he showed the painting to his new employer, Roland Begneaud of Begneaud's Pharmacy.  Roland immediately recognized the talent and potential in this unknown painter, and he requested an introduction, which Dickie arranged. 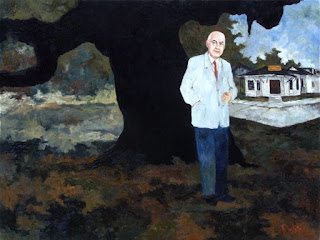 It was the beginning of a friendship, a respect between artist and collector, and ultimately an extraordinary private collection of Rodrigue paintings.

Roland Begneaud was an intelligent and shrewd businessman who saw the potential in investing in George’s work. The two friends became fast business associates, working out purchase agreements, oftentimes hand-written on the backs of the pharmacy’s prescription pads, to help Rodrigue finance the improvements on his single-story Victorian-style home on Jefferson Street. Rodrigue famously (and expensively) raised the house, building an additional floor underneath as his gallery. 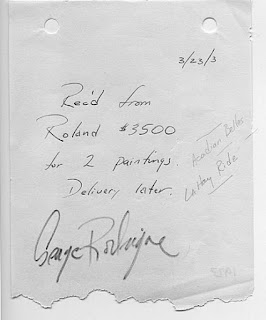 Ultimately, Roland Begneaud amassed one of the best collections of Rodrigue’s early Cajun paintings, particularly after he added people and scenes to his landscapes. 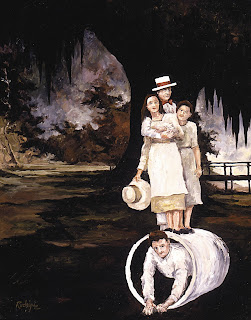 Based on 1920s-1930s area photographs from his mother’s album, these paintings reflect Rodrigue’s interpretation, what he called “a naïve surrealism,” of a fading era. He described his paintings as timeless ….Do they depict 1820 or 1920? And he lamented that few local people appreciated the way he portrayed them, “as primitive, living beneath the trees.” 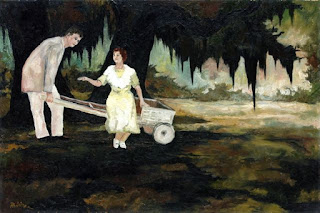 With the exception of Roland Begneaud and a handful of other friends, the majority of Rodrigue’s collectors, whether Cajun or Blue Dog canvases, lived outside of Louisiana.  And throughout his life, Rodrigue remained grateful to Roland Begneaud for appreciating and nurturing his vision. 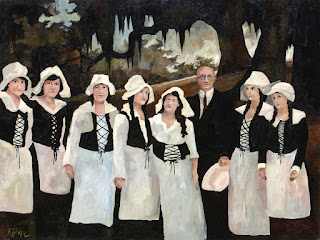 In 1976, both Rodrigue and Begneaud celebrated their success when the book The Cajuns of George Rodrigue (Oxmoor House), featuring eleven works from the Begneaud Collection, was chosen by The National Endowment for the Arts and Rosalynn Carter as an Official White House Gift of State during the Carter administration. 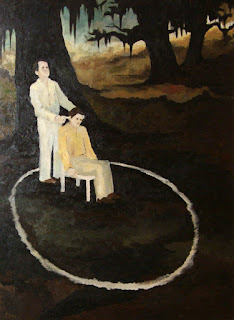 Today the more than thirty Rodrigue canvases acquired by Roland Begneaud are still treasured by his five children, Doug, Kenny, Louise, Donald and David, and their children. The Rodrigue family honors George Rodrigue and Roland Begneaud in bringing together, with gratitude to the Begneaud Family of Lafayette, Louisiana, an unprecedented exhibition of these outstanding paintings by one of America’s most important artists. 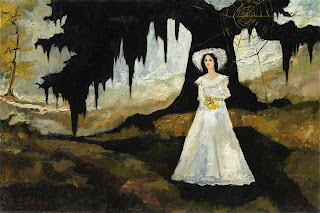 Please join me at Rodrigue Studio, Lafayette, for the opening reception for this special collection of early Rodrigue Cajun paintings, as we celebrate George Rodrigue and the Begneaud Family.  Thursday, October 27, 2016; 5-7 p.m. Details linked here.

Hope to see you-
Wendy

-In addition, please join me this Friday, October 28th, 2016 at the Alexandria Museum of Art, when I'll be reading from The Other Side of the Painting (UL Press) and sharing original Rodrigue paintings from mine and George's private collection.  2:00 p.m. FREE. Details linked here-

-And this Saturday, October 29th, 2016 join me in Baton Rouge for the Louisiana Book Festival.  I'm on a panel with Dr. Chris Cenac for his impressive new tome, Hard Scrabble to Hallelujah: Legacies of Terrebonne Parish, Louisiana, which features beautiful reproductions of a dozen Rodrigue paintings.
Afterwards, I'll read from The Other Side of the Painting and share original George Rodrigue paintings from our collection.  2:00 p.m. FREE. Details linked here-