It’s three years ago today, December 14, 2013, that we lost George Rodrigue.  I embrace, as I do every day, his beautiful light, shining now as bright as ever, through the legacy of art and philanthropy left to us by this beloved husband, father, and friend.

George is an example to others through his kindness and generosity, and through his unrelenting pursuit of his dreams.  He left a lasting gift to the world through his tangible expressions in paint, print, sculpture, and words of his luminous and unprecedented ideas.

"Great works of art take on a life of their own, long after the artist is gone." -George Rodrigue 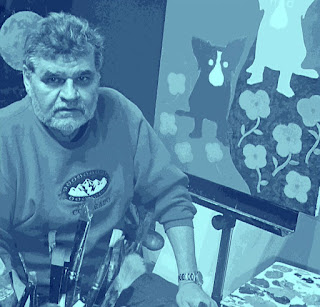 -a photograph taken by Wendy, December 2012, and filtered blue by George ----titled within his files, “Blue Christmas”- 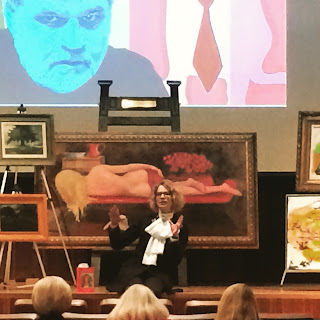 -sharing George's paintings and stories at the New Orleans Museum of Art, December 2016- 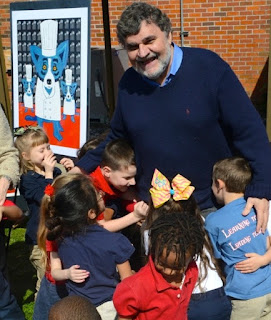 Posted by Wendy Rodrigue Magnus at 12:16 AM 0 comments

George first created jewelry in the 1970s, hand-forming designs in clay from his images of Oak Trees and Jolie Blonde, which he reinterpreted as solid gold pendants.  Later he made for himself one-of-a-kind Mardi Gras coins featuring elements from his paintings, also in gold, and embellished with precious stones.

In the 1980s George met Douglas Magnus, a renowned Silversmith in Santa Fe, New Mexico.  The two formed a lasting friendship that included their mutual respect as artisans.  Over the years they worked together on numerous projects, including a line of “Blue Dog Jewelry,” released in a small quantity in the early 2000s.  In addition, Magnus created many one-of-a-kind Rodrigue pieces, designed by George as gifts for me. 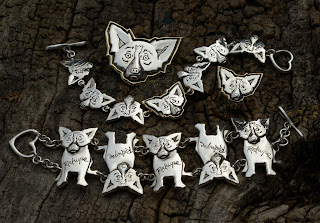 In 2016 I approached Douglas Magnus to reintroduce the jewelry line using George's original designs.  Unavailable for more than a decade, these special pieces are updated by Magnus, based on his experiences in working for many years with his good friend.

“Working with George on these designs and concepts was like a hand in the glove.  George knew what he wanted, and I was able to create that vision.  I think both of us were always very pleased with the outcome.  I feel that the updated collection achieves a higher standard of completion and quality, with attention to detail, in the spirit of George and his art.”

Unlike the earlier pins and pendants, the reworked designs include an emphasis on George's distinctive signature as an artistic element within each piece. 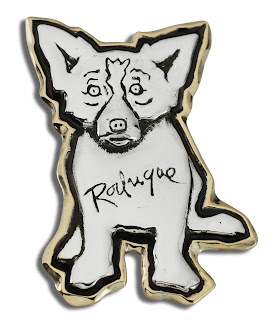 These works of art are hand-crafted with the highest quality using sterling silver and, in some cases, 14k gold auras, per George's original instructions.  The backside of each piece is as beautiful as the front, again with an emphasis on “Rodrigue." 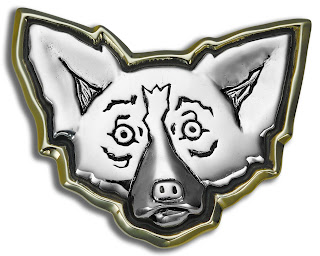 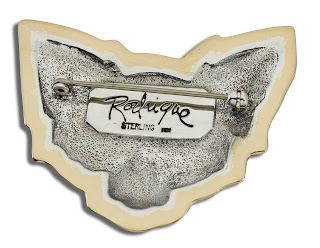 In addition, this new collection, available only through Rodrigue Studio, includes several items that George designed in collaboration with Magnus, exclusively for me, including a sterling silver Blue Dog Series bracelet from 2013.

In all cases, the jewelry is handcrafted, piece-by-piece, by Magnus Studios in Santa Fe, New Mexico, where George Rodrigue worked with Douglas Magnus for nearly thirty years. 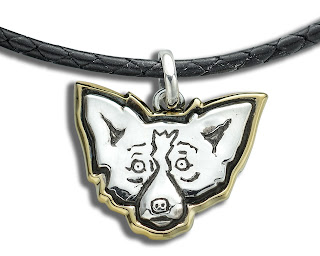 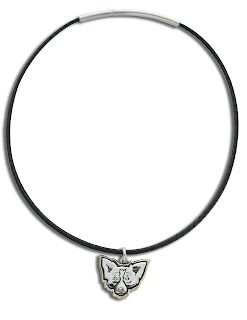 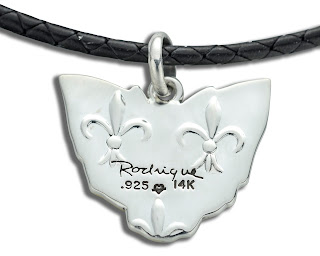 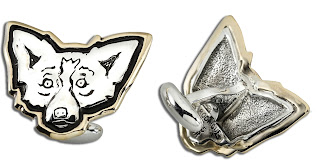 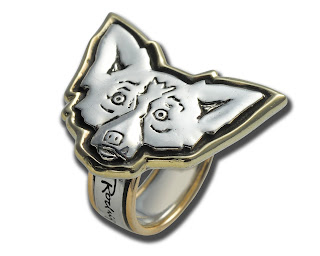 I considered for quite sometime whether or not to reintroduce the jewelry.  George and I visited Santa Fe many times, not only because we love the area and its people, but also because George enjoyed a unique camaraderie and artistic-exchange among his friends here. 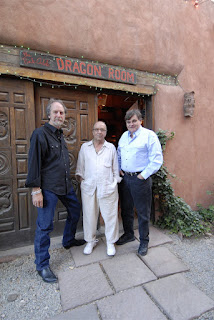 Today, because I live between Santa Fe and New Orleans, I have the opportunity to watch Douglas at work and channel those memories.  Many afternoons I visit his shop as he works on "Rodrigue," and as he honors, with meticulous care and craftsmanship, a great American artist. 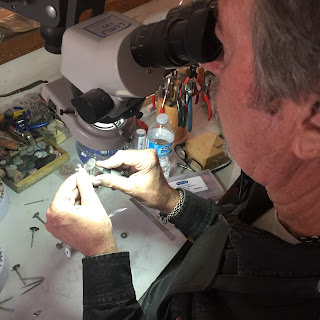 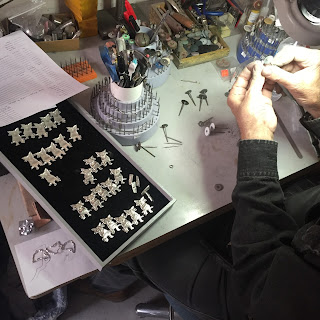 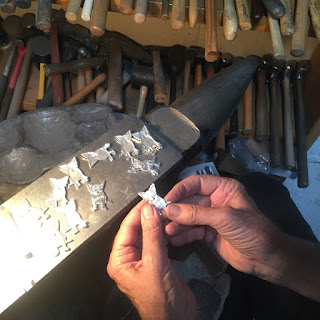 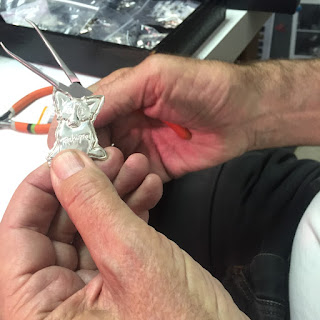 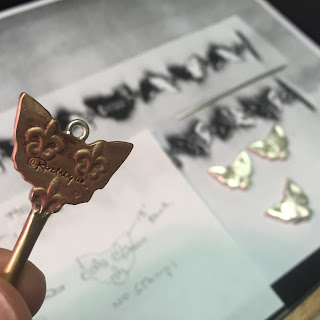 Sharing the jewelry again feels right.  As I've said many times, I am not the artist, and yet this process feels like working with George and moving forward with his designs....... in a way that he would want.  Furthermore, within the galleries, it's particularly poignant to have something 'new' from George. 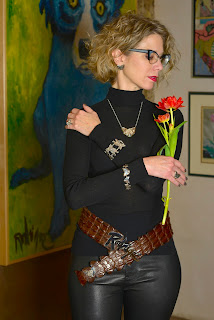 Douglas Magnus (b. 1946) moved to Santa Fe in the late 1960s, following his childhood in Los Angeles, California and Silverton, Colorado, and a formative two years with the U.S. Army in El Paso.

A photographer and videographer, Magnus expanded his oeuvre while in New Mexico to include painting, sculpture, and jewelry, an art form he honed while apprenticing with local Indians in Gallup, New Mexico. Soon after he acquired the famed Cerrillos Turquoise Mines, the same land originally mined by Native Americans some 1000 years ago, and later by Tiffany & Company in the early 1900s.

Today Magnus lives and works in Santa Fe, New Mexico, conceiving original designs and finished products from turquoise, silver, gold, and other materials. He is also a prolific painter, embracing numerous subjects such as interiors and figurative works, while partial to plein air paintings created on site at his mines.

Above all, Magnus embraces quality materials and meticulous craftsmanship, remaining true to his unique, evolving vision and his commitment to beautiful, handcrafted works of art. 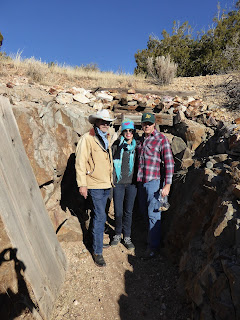 -pictured above:  Douglas Magnus, Wendy Rodrigue, André Rodrigue at the Tiffany Mine in Cerrillos, New Mexico, 2015.

-Rodrigue Jewelry is handcrafted and very limited; at this time, prices range between $475 and $4750;  for availability, contact Rodrigue Studio at this link- https://georgerodrigue.com/contact/