Don’t Slow Me Down

In the spring of 2013 George Rodrigue and I drove our truck cross-country from New Orleans, Louisiana to Carmel, California, as we had twice annually for twenty years, finding adventure on alternate routes and detours along the way. 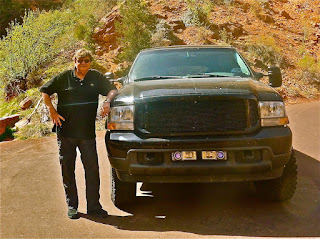 We didn’t know that this would be our last road trip; however, we did travel with a secret.   We learned while passing through Houston that George’s cancer had returned.  But we told no one, opting to shelve this unwelcome news, as well as the impending treatments, until after the drive.

We made the most of every moment ---not because we didn’t think he would beat it (we did!), but because that’s how we rolled on these road trips, as we focused on our conversations, on the scenery, and on the world spread before us.  -photograph by George Rodrigue, southern Utah, 2013- 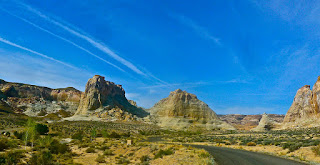 In Mojave, sixty miles east of Bakersfield, California, on Hwy 58, we stopped at a roadside stand and perused ceramic statuary. 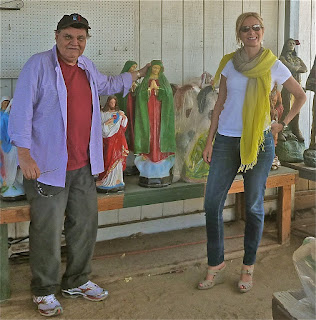 Ignoring the 100-degree heat, George became captivated by the life-size, colorful tortoises on display.  He purchased two adults and a baby, emptying and rearranging the loaded truck to fit them.

That evening, after we arrived home in California following three weeks on the road, he placed the tortoises beneath the lace oaks surrounding his studio.  During the following months, he photographed them and played with designs in his computer.  He placed one of the images in a TO DO file on his desktop, where I later discovered it. 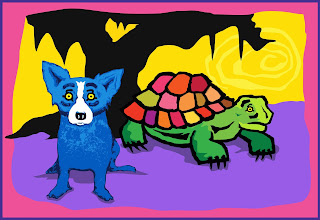 Simultaneously, George explored the tortoises in paint.  This related unfinished painting is one of three he was working on in the last months of his life. The original canvas and the baby ceramic tortoise are on view at Rodrigue Studio New Orleans until March 2018 during the special exhibition Rodrigue’s Heartland:  Under the Oaks and Out of the Swamp. 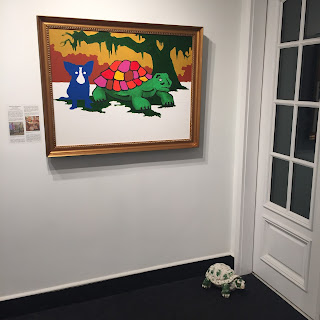 Another uncompleted painting is a dog-in-a-landscape, which sits on George’s easel at the Bayou Teche Museum in New Iberia, Louisiana, where his California studio was moved and reassembled last year as a permanent installation in his hometown. 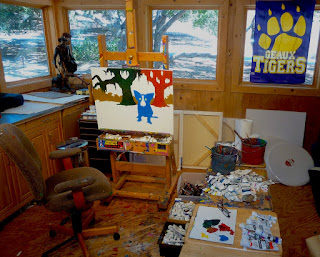 Finally, the third unfinished painting is a return to the traditional Rodrigue landscape, with tombs beneath the oaks and a river extending towards a small, bright horizon.  That canvas, as well as three completed artworks, accompanies me on a statewide Louisiana school tour this fall.  Learn more. 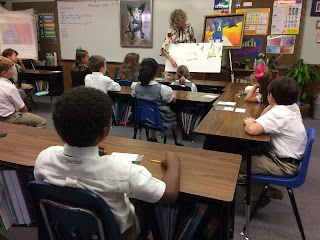 Are you afraid?  I asked George one evening in December 2013, as I lay my head on his chest, matching my breath to his.

Among his last artworks, Don’t Slow Me Down is a poignant reference to Aesop’s fable, The Tortoise and the Hare. This happy image, created as George’s health severely declined, speaks of life's journey, combined with the value of patience, perseverance, and humility ---- all while traveling the road to a brighter future.

But we take all our adventures together, I replied. 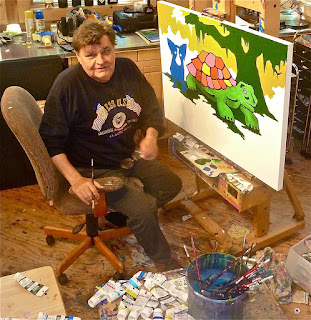 -Rodrigue's Heartland:  Under the Oaks and Out of the Swamp honors George Rodrigue's lifelong exploration in paint and sculpture of the Louisiana Landscape, both real and imagined. On view through March 17, 2018 in New Orleans. Learn more.

Posted by Wendy Rodrigue Magnus at 11:50 AM